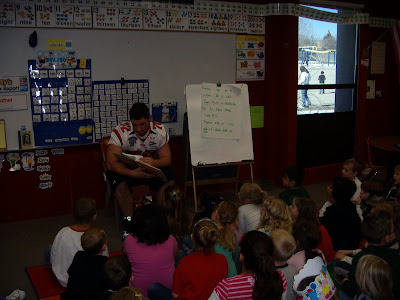 As if I needed another reason to cheer for my beloved Utes...
My new student teacher is really awesome.  Not only is she a great teacher, but her cousin is dating Caleb Schlauderaff, Offensive Guard for the University of Utah Runnin' Utes! He started this year and was a huge factor in the Utes success.
She arranged to have Caleb come read to our class.  She said she did this for the kids, but I think she also knew it would totally make my day.  Anyhow, I was overjoyed when he agreed to come for a visit.
Caleb brought a friend with him: Right Tackle, Dustin Hensel.  While Caleb's arms were larger than my thighs, Dustin was in a whole different league.  The man is 6-7 and 307 lbs - and not fat.  The kids were blown away at his enormity.  He seemed to fill the entire room.  (He has a good chance to be drafted this year and I certainly hope he does.)
When they came into the classroom, there were several parents that had heard word that they were going to be there and came to visit.  I introduced them to the class by saying, "KIDS, WE ARE VERY LUCKY TO HAVE TWO OF THE MOST IMPORTANT PLAYERS VISIT US FROM THE BEST TEAM IN THE ENTIRE COUNTRY!"
These guys were so cool.  They split up and Caleb read a book to my class while Dustin read to the other class.  They then answered questions. 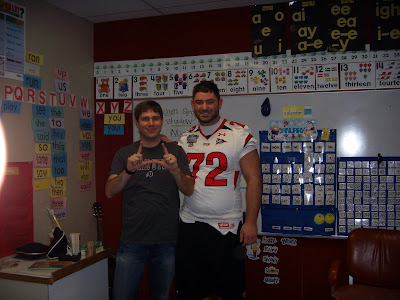 One kid asked Caleb if he had killed anyone before.  Caleb looked right at him and said, "I think I only killed one person, a small redheaded kid wearing a Steelers jersey."  The boy, of course, fit this description and we all had a good laugh.
The guys stayed, took pictures and signed and autograph for every kid.  They then glanced out the window and saw some older kids playing basketball.  You should have seen the fifth grader's faces when two enormous Utah players, wearing Ute jerseys, stepped onto the black top for a game.
They then stayed outside for an hour and signed even more autographs.  Several parents will probably be surprised tonight when their kids come home with their sneakers autographed by a couple linemen. 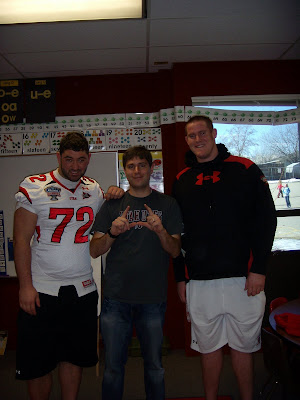 There are not too many "perks" of being a First Grade teacher, but today I found one.  These guys made this one of my best teaching days ever.  It was great fun.  Thanks Brooke, for setting it up!
By the way, the guys told me to make the "U" sign during the picture, although this one is a bit sagging.  We also got a picture of the entire class with the guys, making the "U" sign, even the ones I KNOW are BYU fans.  I plan on making copies and giving them to their parents at parent/teacher conference.
These guys really went out of their way and stayed much longer than they needed to.  They could have just shown up and made an appearance, but they wanted to stick around and make sure everyone on the playground got an autograph that wanted one.
One last thing funny I just remembered - the First Graders kept asking the guys, "Where's Louie?" or "Where's the kicker?"  Caleb mumbled something about that guy being the king of the city and I think Dustin was a little angry as he is Louie's roommate.
It's these guys and days like these that make me so proud to be a Ute!

Nice story. Well done Cousin Balki. I'm happy to put this on Ute Fans for you, but I know how much you like traffic, so maybe you'd prefer I just linked your blog and sent everyone your way.

Tim, I am not sure I am prepared for THAT amount of traffic if you were to link it. Do you think these guys would care? I didn't really ask them.

Abe,
These guys were great- Of course, I am one of those known BYU fan parents- but I can be gracious. I was on the playground during the autographing and worried a little that they would be mauled by the kids, but they were good sports and patient with all the noise and screaming. One fifth grade girl actually cried! What a memorable day.

Thanks Stacy! (And welcome to my blog.) Sorry to leave you in such a lurch out there at lunch, in the midst of chaos. I agree, the guys were more than hospitable.

By the way, I probably would have been cool with some BYU players coming, but I am sure glad they were Utes.

That is great. How nice that they stayed for so long and that they even went out to hang with some of the older kids who probably appreciated it even more than your first graders.

I'll never forget the time we went to the Jazz autograph signing. Matt Harpring was such a jerk! I don't recall the exact comments he made, something rude about having to sign autographs for an hour... right in front of fans that pay HIS salary. I lost all respect for him and have disliked him ever since that night several years ago.