Congratulations Royal Bliss! (And how they helped me get married.) 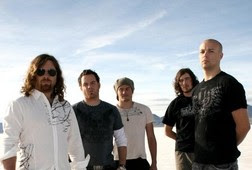 My most sincere congratulations go out to Royal Bliss for releasing their first major label album this week. I am pals with a couple guys in the band, Chris & Jake. In fact, Jake played a crucial role in getting Cathi interested in me - basically pleading with her during our first outing that I would be so much fun to go out with. She didn't need Jake to tell her that - she found out for herself that I was the funniest guy on the planet. Too bad my humor seems to have washed away in the seas of marriage and the only time she ever laughs at me anymore is when I say something extraordinarily funny. That's not to say I don't try.

Speaking of these Royal Bliss guys - funny story. When I first started dating Cathi in high school, I would invite her to hang out with me at the Elementary school that I night janitored at. There was a certain Kindergarten room that had a sofa that was perfect for making out. One night, while kissing of the K-couch, we had the distinct impression that we were being watched. Sure enough, we looked up and to our dismaying dismay, there were these afore mentioned Royal Bliss boys and Steve (Thanks Steve!) staring at us through the classroom window. At first we were not sure who it was, however, as they were all in disguise; each one wearing a Halloween mask and a cloak. Glad we could provide a show.


Anyhow, congrats again fellas - I hope they make it huge on the national scene and make loads of cash. I hope a Cheeseboy endorsement helps you sell more records, as I am sure it will. Endorsements from First Grade teachers always hold a lot of weight in the world of Rock & Roll.

P.S. Yes - I do like to name drop famous people I know in my blog. Cindy Crawford, Paige Davis, Dave Bolerjack, Royal Bliss. I am an important, important man.

Yay for Royal Bliss! I think Michael let me borrow an album years ago and I loved their sound.

I sold Marie Osmond a candle at the GAP about 15 years ago. I know, how cool is it that I used to work at the GAP?!?!