More on Lumberjacks: from an "expert" with a beard. 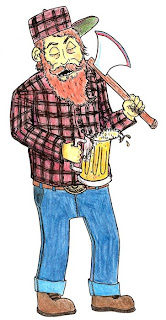 Alright, I know I wrote about this yesterday, but I just can't get it out of my mind: The amount of work that lumberjacks do in a day. What is bizzare is that this will officially mark my third post about the logger, and I still don't feel that I am doing them justice. Let's take for example:
Lumberjacks are usually strong and burly. This is clearly because of the type of work they are doing. Weak lumberjacks do exist when they start lumberjacking, but they soon grow enormous muscles while doing lumberjack work. It is just the natural lumberjack order of things.
Are there women lumberjacks? Why yes, in fact they are commonly referred to as "lumberjills" and do not normally carry a "chip" on their shoulder because they are women. Only 35% are bearded, however.
Lumberjacks normally wear suspenders, flannel shirts and large boots. The suspenders provide a method of holding their pants up, the shirts provide a layer of warmth and comfort and the boots keep the feet dry and clean.
Lumberjacks are often alone in the woods for a very long time. They are required to have a strong knowledge of the lay of the land. They work with nature, not against it; to form circle of woodland life. There is a mutual respect between tree and lumberjack. Lumberjacking is not to be taken lightly.
As you can see, I clearly know a lot about lumberjacking. It takes a full beard for one to fully understand the culture and ways of the logger. Because I have taken their look, I feel I have been adopted into their fold.

You're so weird. Did you know that there was a show on the Discovery Channel on "lumberjacks". I'm not sure why I just used quotes. I have a feeling that like "Orientals", "lumberjacks" have retired the name. I think the only prerequisite these days is you have to stuff your mouth full of tobacco and swears.

Larry - has Orientals been retired, because someone needs to tell the rug folks. What is the PC name for lumberjacks nowadays anyway? Woodcutters? Don't you feel akin to their brood, what with the beard and all?