I'm going to see the movie Mall Cop and I am not ashamed. Who's with me? 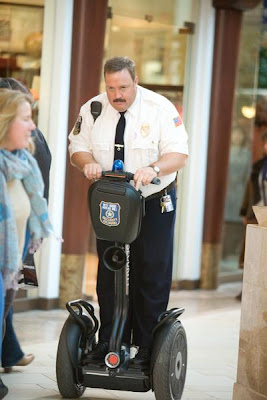 A movie about a mall cop - that's what Hollywood has come to. Granted, I will in all likelihood see this said mall cop movie and I might actually pay full price for it. What may be even more shocking -to some- is that I will probably even like this mall cop movie, especially if there are plenty of crash scenes involving one of those people movers.
Regrettably, it appears that some in Hollywood are officially out of ideas. Those movie moguls have lowered their standards to the point of just making movies about things they see in everyday life. "I just need to pick up a few body butters for my wife at Bath and Body Works - well, look over there, a mall cop drinking coffee. We have ourselves a money maker!" Even worse, these same folks seem to be recycling worn out ideas. Lets take a look at the top 10 movies this week:
1. Marley & Me - Hmm, not sure if Hollywood has ever made a cute dog movie with a sappy ending? Maybe Owen Wilson's nose will make it original?
2. Bedtime Stories - Has Adam Sandler made a movie for kids before? Is Scuba Steve in this one?
3. The Curious Case of Benjamin Button - Okay, this is actually an original idea. I didn't say everything was lethargic and monotonous in Hollywood.
4. Valkarie - Interesting, a movie about Hitler. I wonder if there is a surprise ending? Maybe Hitler sees the error of his ways this time, moves to Fresno with his wife, buys a Camry and plays bingo at the local Y? Also, any movie where the main character wears an eye patch has to be Oscar worthy.
5. Yes, Man - I think I saw this movie 7 years ago, when it was called "Liar, Liar".
6. Seven Pounds - A holiday story in which Will Smith gains seven pounds. I also think I saw this one before when it was called, "The Persuit of Richiness".
7. The Tale Of Despereaux - An animated mouse - I have NEVER heard that pitch before. Does he cook or does he get lost? Does he go west or is he a great detective? I need to know! Better fork out the eight bucks, I guess.
8. The Day The Earth Stood Still - Everyone in New York City dies. Need I say more?
9. Doubt - What is this movie even about?
10. Slumdog Millionaire - Again with the sappy puppy story?! This time the dog is the millionaire!? Not only a millionaire dog, but a rags to riches millionaire dog? Could there be anything more cute? A recipe for a blockbuster if there ever was one.
Changing the subject to a couple different items...
I know that some of the kids in my class's parents are Ute fans and I asked them if they watched the game and every single one of them had the same exact response: "Yeah, my dad was jumping up and down and screaming at the TV all night." Pretty funny, and I'm not kidding, at least four different kids told me this on separate occasions.
Speaking of the game, what was with Fox showing the band every three and a half minutes? I saw more band shots than I did Brian Johnson. I realize the band just oozes coolness and that there are more than a few "babes" playing the trombone, but Fox went way overboard on how often they cut to the trumpets. If I was playing a drinking game, I would have passed out by the end of the first quarter.
One last thing: Calder has taken to calling me "Abraham". I have no idea where he got this from - no one calls me Abraham and it certainly is not my real name. He will be lying in bed and all of a sudden we will hear in a two year old voice, "ABRAHAM? ABRAHAM? I NEED A DWINK OF WATER!"
Oh, and I also now have 95 "pretend friends" on facebook. 95 friends in 3 days! If only that were possible in high school. I would have been homecoming king!

We've marked Mall Cop on our calendar. You'll have to let us know what you think. Oh, and by the way... I'm real Abe! No pretending here (in reference to your "pretend friends" on facebook). Hmmm.

Yay on having so many "pretend" friends! Now tell me why you want that?

I haven't heard of 99% of the movies you mentioned in your post but if that mall cop movie is with Kevin James it will probably be hilarious!

Around our house we always call you Abe but yesterday Nathan and I were talking about the Bible story Abraham and Isaac and how Isaac is Abraham's son. I never can tell if he's listening. His only response was "Mom! That's like Abraham and his son Lincoln!"

I totally want to see it!! And so does Mike

I know you don't like to download your photos onto blogger, but you have to get Calder on video calling that out from his bed and put it on here!

I bet 75% of your "pretend friends" are your cousins.

If Mall Cop sucks I'll be pissed. We rented the last Kevin James movie where he was "pretend gay" with Adam Sandler and it was the dumbest movie I've ever seen.

Did you see this national poll yet?

Yeah Ike, that movie was really awful. And that poll tells the truth. Oh and are mostly real.

1- I would also like to see Mall Cop.
2- Seven Pounds is original and very good. Josh and I saw it. I would recommend it. Of course it's got Will Smith being a good guy again. That's not original.
3- What is that cd on your blog with the two people in circular mirrors? Did you know that those people were on the Brittish comedy Red Dwarf, in those mirrors?