My Favorite Movies of 2021
HONORABLE MENTIONS
The Night House
Dear Evan Hansen
Old
The Mitchells Vs. The Machines
Riders of Justice
Shang-Chi and the Legend of the Three Rings
The Lost Daughter
Tick, tick... BOOM!
The Eyes of Tammy Faye
Nine Days

21. The Harder They Fall (2021): 4 out of 5 stars - The filmaker uses a formulaic western to draw parallels to both slavery and current African American gang life. The result is a predictable story, but with supreme execution and excitement. The fight scenes are engaging, violent and gritty. The acting is darn near perfect. It's on Netflix and it's a lively two hour ride. (Seems like there are an abundance of westerns released this year.) 20. Nobody (2021): 4 out of 5 stars - This movie would be a 2 star film without Bob Odenkirk. With him, it's 4. This role seemed to be written for Odenkirk, and the 58-year-old steals the show with his performance! He makes the movie funny, entertaining and exciting, even though it lacks in so many areas. There are many action movie cliches that drag it down, from wounds that heal in minutes to bullets that never hit good guys, to bad guy Russians. In the end though, it's a blast of a ride. Just a fun, Friday night movie. 19. Spider-Man: No Way Home (2021) - 4 out of 5 stars: This film has three things going for it - 1. Nastalgia 2. Great writing 3. Humor galore (especially the last third of the film). There are other great things about it too - action scenes, effects and a decent, albeit confusing at times, plot that keeps things moving. Lastly, it has heart and lots of it. The heart of the movie and the tribute to Spider-Men fanboys and girls, like myself, is what makes this thing go. 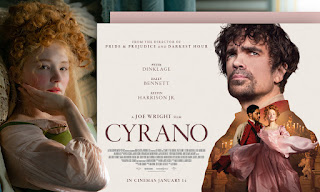