My Favorite Movies Released in 2017

Hi folks. Thanks for reading this. I am honored that you care what I think and my opinions and stuff. I still haven't finished watching all the movies released in 2017 that I'd like to, but I am tired of waiting for them to come out on video. As such, I will give you what I think now and update the list if I watch deserving movies. So, let's get to it, shall we?

The following movies were all excellent, but just couldn't crack my top 20...

19. Marshall (PG-13)
Not sure how this movie flew under the Oscar radar. I felt that Chadwick Boseman deserved at least some consideration for his portrayal of a young Thurgood Marshall. I was captivated by this story and the feel-good ending had people in the theater clapping out loud. I know, I had to sit by those people.

The year’s best animated movie and it is not particularly close. I found this movie to be original, creative and funny. Everything you have come to expect in a Pixar movie.

Andrew Garfield saved this movie. He proved his acting chops are no joke and he flat out saved this movie from suck-a-tage. As it turns out, this movie turns out to be a quite heartening and exalting journey through the life of a paralyzed man.

The most impressive part of this film was the acting. Every part, every scene; it was the most well acted film of the year. While I couldn’t get past certain plot points, not making sense, the whole of the movie overcame those weaknesses to make it a pretty decent movie. Warning though: more curse words than you’d ever expect in this one.

15. Baby Driver - R
The opening scene of Baby Driver was quite possibly the best scene in any movie of the entire year. Watching Baby Driver made me feel cooler than I really am.


The funniest superhero movie ever made. (A close second is Ant-Man.) Also, it was quite the adventure.

13. The Greatest Showman (PG)
The story, plot and dialog of this movie were, shall we say, “below average.” However, the musical numbers are shockingly phenomenal. The choreography, dancing, singing, music, it’s all very catchy. The musical numbers far outweigh the negatives and true movie magic takes place.

After 40 minutes of watching this film, I wondered to myself, “Why am I watching these obnoxious kids wander around the strip outside Disneyworld? Is this what the movie is? Is this the whole movie?” And then something magical happened: I started caring about these kids. I mean, I really cared about them and their horrible, horrible life circumstances. This movie felt real and raw, like watching an episode of Cops where you care deeply about the people that are being arrested.

11. Wonder (PG)
I went into attending this movie with the worst intentions, fully expecting to hate it. I left feeling uplifted and full of hope. I was impressed with the acting of young Jacob Tremblay, which I had last seen in “Room.” As an elementary school principal, I fully believe that every student in America should see this movie.

9. Star Wars: Episode VIII, The Last Jedi (PG-13)
I flat out don’t get the vocal group of haters for this film. I thought it was everything I wanted and needed Star Wars to be. The fact that there were strange scenes only endeared me to it more. People forget that the original trilogy was full of strange scenes and those became classic moments that folks still talk about. Anyway, I loved it. Best Star Wars since Empire.

Often, after I would watch a movie, I would rank it higher on my list than it actually deserved. Such was the case with “The Shape of Water.” Immediately after watching it, I ranked it #3 on this list. I then slept on it, woke up and decided the plot was just a too weird for it to be ranked that high. That is not to say that this was not a well made movie. It was! In almost every way. Perhaps I am just a little too old fashioned to find an old fashioned movie about a woman that falls in love with a fish good enough to be ranked in my top five.

7. Get Out ®
This was the first movie released in 2017 that I saw in 2017 and it was one of the best. It remained number one on my list for months and months. I know the movie has been praised for its’ social commentary and timeliness. But beyond that, I found it to be downright creepy with a dark comedy twist.

6. The Big Sick ®
Funny, charming and filled with magical moments, this movie was an absolute joyous surprise. All future romantic comedies should look to this film as an example of how to make a romantic comedy without it feeling too smatzy.

5. Logan Lucky (PG-13)
This movie has been described as a “redneck Oceans 11”, which is a great description, however, it denotes that it is somehow lesser than Oceans 11. In fact, it is better than the Oceans movies in almost every way. It certainly has the comedy angle mastered and I found the clever plot twists to be ever-so-entertaining.

Lady Bird was quite simply my favorite Academy Award Best Picture nominee in a relatively (in my opinion) weak crop of Best Picture nominees. I love a good coming-of-age story and Lady Bird was just that. The first half of the movie is quite hilarious, with clever line of dialog after clever line of dialog railing against your funny bone until you are in a fit of giggles. I guess of all the movies nominated for Best Picture, I would have picked this one, if I had had a vote. There was no clear winner of all the best picture nominees in my opinion this year.

I was not expecting to enjoy It as much as I did. It was a compelling, energetic and yes, scary movie with acting from kids that was actually good. Normally, I hate horror movies, but It was something more than a horror movie. It was filled with six different stories of kids overcoming their battles with their own demons. Conquering the It demon together is actually a secondary, less important story to the stories of each kids’ life. The pacing, the acting, the storytelling, the character building, all of it made It a terrific movie, even if the kids said a few swears.

2. Brigsby Bear (PG-13)
After watching two hours of Brigsby Bear, I am still left to wonder: was it a comedy? Was it meant to be a comedy? Was it meant to be a comedy/drama? I am still not sure, but this I do know: no movie all year made me laugh harder and no movie was made with more heart. As an added bonus, the entire thing was filmed in my home town of Salt Lake City! By the way, if you were wondering if Mark Hammil’s best role this past year was Star Wars, you’d be wrong. It’s his role in Brigsby Bear. 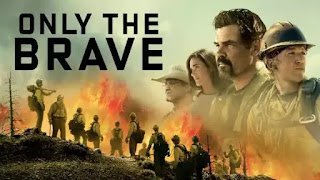 The first two-thirds of this movie move along quite nicely, with superb humor, solid acting and an interesting-enough storyline. It is during the film’s final third that it really starts to soar. The cutting, somber finale makes this one of the year’s best films. Certainly, this underrated film deserved to do much better at the box office and was even more deserving of at least a few Academy Award nominations. Alas, it was not meant to be, but that does not lessen my appreciation for it. This was the best movie I watched in 2017.

And now... in the spirit of keeping good records, here is the list of my favorite movies of the past 6 years...

2012
10. Premium Rush
9. Moonrise Kingdom
8. The Amazing Spiderman
7. Looper
6. The Hobbit: An Unexpected Journey
5. Argo
4. Frankenweenie
3. The Perks of Being a Wallflower
2. Sleepwalk With Me
1. Safety Not Guaranteed
No comments: