I know it's April, but that's usually about the time I get around to watching all the movies I wanted to see from the previous year on Blue Ray. I mean, who has the time and money to actually go see movies in theaters nowadays? I've gotta mortgage my house just to buy my kids popcorn.

At any rate, it's that time again that I share with those bored enough to care my favorite movies of the year.  You may notice that I almost always make my choices after the Academy Awards. This is because my choices are held in such high esteem, I want the actors to really appreciate them.

Now, you may notice that some of my choices do have swearing, violence and even sex in them.  Please do not judge me as a person based on the movies I like.  I like what I like and I make no apologies for it. As a service to you, my readers, in each movie, I shall list what offenses you might take from the movie, in order for you to judge for yourself it is worthy of your eyes.

At the end of the list, I will list my favorite movies from the past 3 years, just in case you were curious. I should add that there are still four movies (Selma, Unbroken, American Sniper and Wild) that I want to see from last year and I may update my list.

HONORABLE MENTION
(Movies I kinda liked, but were just okay.)

10. The Hobbit: The Battle of the Five Armies (PG-13) - If there is a Tolkien movie that came out during the year, it HAS to be on my top ten list.  Unfortunately, this was probably my least favorite Lord of the Rings/Hobbit movies. The two previous movies built up to this one and it is pretty much three hours of fantasy war.  Even though it was battle scene after battle scene, my sons and I were still wowed by the effects and especially by how awesome Legolas is.
Potential offenses: Violence and the violence that does take place occurs with fictional Orcs. Unless you are a pretty big prude, there's not much to be offended by.

9. Alexander and the Terrible, Horrible, No Good Very Bad Day (PG) - I was going into this movie totally expecting to hate everything about it. So often I watch these "family comedies" and there is not one good joke in the entire thing. Quite the contrary, usually the jokes are so flat and terrible, it's hard to stomach watching the entire thing with my kids.  This movie, however, bucks that trend. I loved almost every minute. Steve Carrell is insanely funny in this movie and the jokes do not fall flat. They fall round. This one is a guilty pleasure for me, but I can honestly say that no movie made me laugh from start to finish last year more than this one.
Potential offenses: A couple slightly crude jokes. A somewhat dirty (but funny) joke by the mom. Really mild stuff.

8. The Theory of Everything (PG-13) - I was never much interested in the early life of Stephen Hawking, but this movie created an interest that wasn't there before. I was curious to see Stephen pre-illness, fine and walking and happy.  His physical spiral did not match his physical spiral which created quite a story. Eddie Redmayne deserved the best actor award.
Potential offenses: Not much, unless you are offended by seeing people have affairs. Maybe a few swear words. Oh, there is one scene with a Playboy magazine.

7. Joe (R) - My favorite kind of movie is what one might call a "Coming of age" movie. While Boyhood was the ultimate coming-of-age movie this year, this one was terrific as well. And before you write this movie off because it's got Nicolas Cage in it, I must inform you that he was the best part of this movie. He was terrific. He deserved an Oscar nomination, imo. Now he can go back to making terribly cliche movies.
Potential offenses: Lots and lots of swears. Violence including one scene that is exceptionally violent.

6. Big Hero 6 (PG) - For a long time, I had this movie #1 on my list. Alas, it fell, but it still deserves much love. Almost every animated movie that comes out is a rehash, remake or a sequel. No idea seems original. How many movies about princesses do we need? Well, this year finally bucked that trend with what I believe is the best animated movie in years. Original, creative and awesome. I've watched this movie maybe 12 times with my sons and it never gets old.
Potential offenses: Maybe an explosion where a kid dies inside?  I don't know. Nothing much.

5. Boyhood (R) - After watching this movie, I thought for sure that it was going to be my favorite movie of the year. The way it was filmed over 12 years was something that had never been done. It was unusual and captivating. To watch this kid grow up before your eyes was extremely cool.  However, its major faults: It's too long and there is no real plot made it fall to #5. When I think about this movie, I think of it's beautiful moments rather than the movie as a whole. There is a scene where the dad is trying to explain to his son that elves do not actually exist. It is a touching moment where you see a boy lose just a bit of his charming innocence. There are so many amazing moments just like that in this movie. While it wasn't my favorite movie of the year, if I had a vote for best picture, I would have picked Boyhood.
Potential offenses: The kid uses drugs recreationally. There is a lot of swearing. Way too much I thought. It took away from the story. There is one scene where teenage boys discuss stuff that teenage boys discuss. While it was very realistic, it was also very graphic.

4. The Imitation Game (PG-13) - Thought provoking and nail-biting. I bit a lot of nails. Great acting, a superb story, really everything you'd want in a movie. If you like Benedict Cumberbatch, you'd love this true-life story of the birth of computer science.  Just fantastic.
Potential offenses: No swearing that I recall. Some mature material like a man dealing with his own sexuality. Lots of smoking as people did back then.

3. Big Eyes (PG-13) - I'm as big a Tim Burton fan as they come, so I knew this movie would make my list before I even saw it. I would say that this is likely Burton's most mainstream movie, but it definitely has that patented Tim Burton feel to it. The story was fascinating, but it was the unique style and Burtonesque flair that made it come alive to me. And the final scene, in the courtroom was absolute genius. The funniest scene in any movie all year long.
Potential offenses: Some implied sex. A few swear words. I think one F-bomb.

2. Whiplash (R) - This movie was exceptional. I suppose it can be classified as another coming-of age movie. If you've ever hated a teacher, truly hated a teacher, you'll appreciate this movie. It is powerful.  I do believe that this movie has the best ending I have ever seen. I loved the final scene. (Opposite of Gone Girl.)
Potential offenses: TONS and TONS of swearing. 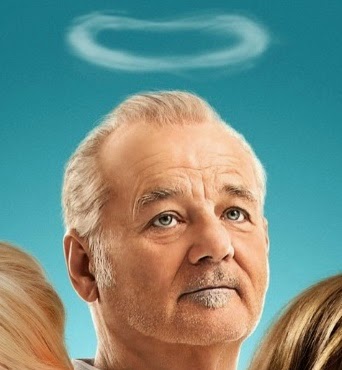 I've been waiting for a movie to come out where Bill Murray gets to play the kind of character that he is so genius at playing.  This one was perfect.  Murray is great, but it's the chemistry between he and the kid and Melissa McCarthy that really makes this movie go.  It's a powerfully moving movie and during it's playtime, you go from hating Bill Murray's character to adoring him.  My favorite movie of the year.
Potential offenses: If you are offended by sex scenes, I'd suggesting starting the movie 2 minutes in. There is a relatively tame sex scene to start the movie and if you skip the first two minutes, you will miss it and not miss any essential plot points. Other than that, there is just a few swear words.

2012
10. Premium Rush
9. Moonrise Kingdom
8. The Amazing Spiderman
7. Looper
6. The Hobbit: An Unexpected Journey
5. Argo
4. Frankenweenie
3. The Perks of Being a Wallflower
2. Sleepwalk With Me
1. Safety Not Guaranteed
1 comment: