Since I was a kid, I've enjoyed making lists, especially top ten lists. I don't know if it was because I watched a lot of Letterman or not, but even as a ten year old, I was constantly making lists. I made lists of my favorite songs, of my favorite baseball players, even of my favorite foods.  Each list was done in a "Top Ten" style and each list was recorded in a notebook with the title "My lists."

I continue to love making lists, and as such, I have made a list of my top 10 favorite movies of 2012.

Finally, before I get to my favorite movies of 2012, you may wonder where "Les Miserables" is.  I have never been a Les Miserables type of guy.  I watched the movie and it was okay, but it sure had a TON of singing in it.  So much singing!  It was a little too much for me. Perhaps there is also another movie that you feel deserves to be in the top ten. Well, most likely I didn't see it. Less likely, I saw it and I hated it. If that is the case, I apologize for nothing.

So, without further ado, here are my top ten favorite movies of 2012...

10. Premium Rush - The first of two Joseph Gordon Leavett movies on my list, although it did seem like he was in every movie I watched this year. This movie was more action-packed than any other movie I watched. Non stop adrenaline from beginning to end. My only complaint was the "bad guy" was so over-the-top goofy and stupid, it was almost like he was the Principal from Ferris Bueller's Day Off.

9. Moonrise Kingdom - I love quirky movies, but not too quirky and this one had just enough quirk to keep me beyond satisfied. Plus, Bill Murray!

8. The Amazing Spiderman - The Avengers was good, yes. So was The Dark Knight Rises. If I had a top 20 favorite movie list, they would both be in there. But for my money, the best superhero movie this year was Spiderman. I also feel it surpasses the past Spiderman compilation.

6. The Hobbit: An Unexpected Journey - I'll admit, I am a huge Tolkien nerd. Not the biggest Tolkien nerd, of course.  Many, many people would surpass me in that category.  But, I'd say I'm in the 60% biggest Tolkien nerds.  I liked this movie just as much as the previous Lord of the Rings movies, which I was not expecting at all.

5. Argo - Okay, I have seen five of the movies that were nominated for Best Picture and this was by far my favorite, so I personally believe the voters got it right, whoever they are.

4. Frankenweenie - I believe that this movie got overlooked by many because of its name.  It was hands down, the best animated feature of the year and I enjoyed every second of every minute. My boys would also tell you that it was their favorite animated movie of the year and they have seen them ALL. (Including "Brave", which by the way, should NOT have won best animated feature.)

3. The Perks of Being a Wallflower - This movie really was incredible. Not sure what to say about it other than I really liked it and it was really heartfelt.

2. Sleepwalk With Me - One of my favorite stand up comedians, Mike Burbiglia, in a movie based on his book about his chronic sleepwalking. I can honestly say that I laughed harder in this movie than any other movie in 2012.  (A close second would have been 21 Jump Street but I couldn't include it on my list because it had too many stupid moments as well.) 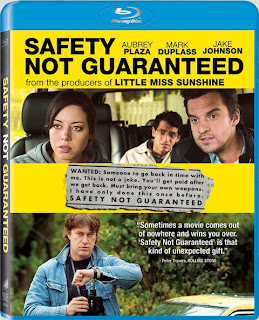 1. Safety Not Guaranteed - You may not have heard of this movie, but it was the most thoroughly enjoyable movie of 2012 for me.  It had laughs, heart, a great plot and time traveling. Amazing that it probably had the lowest budget of any movie on my list (save perhaps Sleepwalk With Me) but was my favorite. Let that be a lesson to you, movie making people.
12 comments: