Respect this! (The story of my new laser pointer.) 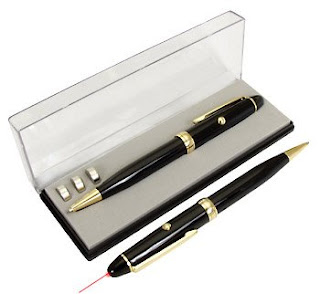 I got myself a sheik, new laser pointer today. Decided to go with the "executive" model. It is a four-in-one model with a laser, highlighter, flashlight and pen. I've decided it's pretty much the one that Jason Borne would carry, if the situation arose that a laser pointer would be needed - like, he had to give a presentation to other spies or make a cat go a certain direction.
I went "Executive" this time for two reasons: 1) The prestige 2) The sleek look. Also, I felt that I needed an industrial strength laser; one that had the ability to melt the skin off a human being. When other teachers see me walk down the hall with the "Executive" in my front pocket, they move to the walls and allow me to pass. I am not sure if they appreciate my winking at them as the "Executive" and I pass on by, but they have to show some respect. The "Executive" demands it. It screams "respect me" from the mountaintops.
Purchasing the Executive model laser pointer has been the best decision of my life. (After, of course, my wife, the kids and deciding to go sockless in bed.)

Abe, I don't know what to say, other than CONGRATULATIONS! I'm very happy for you - I hope to be an executive some day too. Keep an eye for us little people, will ya?

Abe, I gave out laser pointer pens to Doctors and Therapists for Christmas this year with a gift box included. They cost me five bucks and they work awesome. Yours however does look cooler, but my pens did say the very sought after company name Wasatch Orthotics which I understand on the free market increased the value to $49.99. Let me know if you need another. I have a ton!
Mike

I WILL respect the "Executive" as you walk down the hall. Make sure you wear it in your front shirt pocket for all to see.

Mike, I may have to take you up on that offer. And Emily - thanks for commenting!