Hogle Zoo was and is one strange place! 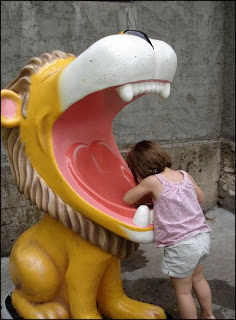 For some strange reason recently my thoughts have drifted into memories of the Hogle zoo as a kid. Perhaps it is the fresh scent of elephant dung circulating the house lately or the petting zoo I have been planning to put behind the garage? I am not sure, but something has got me thinking about the old times at the zoo. (It was called a zoo, but really it is just a collection of about 100 grungy animals lying around in concrete cages.) Does anyone else remember:

Those wax animals that you could have made for two dollars. I remember begging my mom for one of those things, only to be denied over fifty five times. There was something mystical and mysterious about owning a 4 inch mold of wax shaped like a gorilla. And what was with that machine that made those things? - They were huge! Back in 1987, it took eight tons of stainless steel and a six horsepower motor to construct a miniature piece of wax garbage.


Of course, there are so many more fantastic oddities about that place: the round, stanky snake building, the lion drinking fountain, the nearly empty tiger cages. All in all, it was a pretty good place for a ten year old to spend an afternoon with his mom.

Abe, it was at Wheeler Farm that a COW tried to eat my hair. But I got bit by a french hen at the zoo (I think it was the zoo). I remember somewhere gave elephant rides. Maybe the zoo or Liberty park (for some reason that feels familiar, but makes no sense. Why would the park have an elephant?) But I do remember riding an elephant with you and Liz and Jeff Abbott.

Hogle Zoo was my first real job. You should walk around that place after hours. THAT'S strange. I could tell you stories. But mostly I could make you a mean Churro.

My sister rode a camel at Saltair. I had my fingers chomped by a goat at wheeler farm. I fed pellets to ducks at Gardener Village. But I never got that wax animal I longed for from Hogle Zoo.

What a deprived childhood I had.

My parents have a photo of me riding an elephant at the zoo. I have no recollection of it, but apparently it happened. Also, as a junior in high school, my biology class went there on a field trip. Somehow the group I was in got left there by the bus. We were left to fend for ourselves and were forced to take a long UTA bus journey (which included switching buses) to make it back to Murray High because none of our moms were home to come pick us up.

Abe maybe you're thinking of the circus for the elephant ride. Or I do remember a metal elephant slide. Maybe you went down it but thought you were riding the elephant?

I loved those wax animals too! But I think in my day they only cost $0.50 because I remember putting the quarters in.

My favorite thing at the zoo was the little monkeys that were in an outdoor area and I believe it's gone now :(

Tim - I remember you working there. I can never eat food at that place because of the smell.

Michelle - You have an amazing recolection of the hippo exhibit. I am sorry you never got the wax animal.

Tracy - Thank you for the proof that elephants really used to give rides at the zoo - I knew it! Amazing how well they treated the animals back then. I don't even think that the keepers are allowed in the elephant pen anymore.

Tammy, Your parents seem like the type to buy crap like the wax things - they are sometimes buying Lincoln and Calder crap from those quarter vending machine slots when we tell them no.