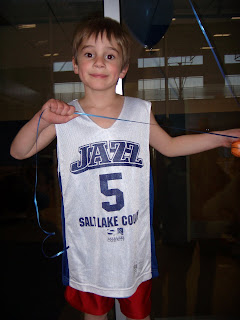 Have you ever had a dream for your son come crashing down, all at once, like that enormous chandelier in the Phantom of the Opera?  Turns out, it happened to me today, as I realized that my son will never play in the NBA.
When your son is in the 1 percentile of height and weight at every doctor's appointment - it does not mean much at the time.  When it does matter is when he is playing Junior Jazz with a bunch of kids a foot taller than him. Lincoln's second ever Junior Jazz game included the following:
Now, if you know Lincoln, you know he is the kindest, most unassuming kid you have ever met and that is a bit of his downfall for him when it comes to organized sports.  His aggressive meter is set to a 1.5 out of 1o.  I think that if he actually stole the ball from another player he would feel badly for them and give it back.  I am not sure he even knows what competition is.
Given his temperament and ability to get along with others, you can tell that he is very well liked by the other players.  He also left the court each time with a huge smile on his face and if anything, he liked running up and down the court at breakneck speeds. (Of course, that is when he was running and not daydreaming about Disneyland.)
So, we are not sure that organized team sports are Lincoln's thing. Honestly, I don't really care that he may never play basketball at a high level - he's got so many other talents and skills that basketball is probably the least on his priority list.  We might sign him up for swimming, music or a staring league.  Heaven knows he would take first place in staring.  In the mean time, he seems to enjoy playing basketball and seeing some new friends each week, so we will make the most of it while it lasts.  So instead of making his dad millions in the NBA, he will make his dad millions being the next Ryan Seacrest, only a male version.
As it turns out, the chandelier in the Phantom never breaks, they just string it back up every day for the next show.

I'm sure you've already guessed this but we also don't have any kind of athletic star with our eldest. We've only tried soccer but he hated it when the kids ran towards him. I've always hoped it was an age thing and he would grow out of it but then the other kids on the team are usually the same age and they seem to "get it". Maybe he takes after Cathi and the rest of the girls in our family :)

I was just thinking yesterday as I watched Ryan get in there and handle the ball, how different each child is in this regard!

When Brandon was little he was always kind of off in his own little world during a team sport, never the aggressive type to get in there and get that ball, and usually quite oblivious to the game going on around him. And, like Lincoln, he was always the smallest one out there! I say as long as they are having fun...like Lincoln obviously was...that's what really counts!

Awwww. Did you do your latest poll for me? So sweet of you :)

You officially made me laugh out loud and work with this one. Thanks, Lincoln, for being awesome.