Dear Jazz fans: Don't count on painting your face purple in May. (Plus Neil Diamond!) 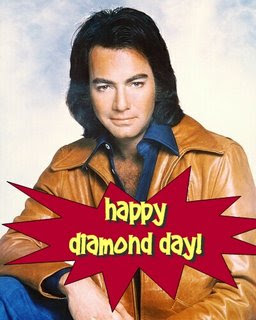 **For those of you that are not sports fans, I pray that you will allow me to indulge those that are fans for a single post.  Please do not cancel your subscription to The Blog O' Cheese for it shall return to it's normally scheduled brain-numbing silliness on the morrow.  For those of you disappointed to see a sports post today, I put a handsome picture of Blog O' Cheese regular, Neil Diamond on the post to humor you.
Now that the football season is over I can focus my attention to the basketball season and I must say, the outlook is dim.
The Jazz are filled with problems, none the least is their overly conservative nature when it comes to making moves to better the team. Granted, major moves will either have a big payoff or backfire - but at least have the courage to try.  By not making a move right now in effort to improve the team, the Jazz will fade away into obscurity; either getting swept in the first round by the hated Lakers, or missing the playoffs all together.
Beside not having the guts to make a trade, the Jazz have several other problems:
1. They have too many above average players and not enough "great" players.  In my view they have one great player, Deron Williams, and even he has had a hard time getting back into the swing of things after his injury.  They need to trade 2-3 good players for one great one.  It will never happen though because of Kevin O'Connor's overly conservative nature.  I would not be surprised, however, if they trade one of their crappy backup point guards for a different crappy backup point guard and then feed us the line that "it will make the team so much better".
2. Injuries.  I don't want to dwell on this too much because clearly this has been a huge reason for the early season struggles.  However, even with the enormous amount of injuries, they should never, ever lose to the Thunder.  Which brings me to #3.
3. Road woes.  No championship team loses to the Thunder on the road.  Ever.  Ever. I don't care if there is not a single starter playing the entire game - that team is awful and it is inexcusable for the Jazz to lose to them.  The Jazz lost to them by 20. The Thunder have won 6 games all year. Would that happen to any of the challengers? Celtics? Never. Lakers? Nope. Spurs? Are you kidding me!  After this lost, I lost all faith in the Jazz to do anything of consequence this year.
In the past 5 years or so, I have become less and less a Jazz fan, although remaining an avid fan of Deron Williams.  I still want them to do well, but it is just so difficult to cheer for a team that is happy with simply staying good enough to make the playoffs.  They need a major overhaul to get another "great" player and I am afraid that they don't have the guts to pull it off.
Sorry Jazz fans, but I am going to predict that they miss the playoffs this year.  (For those waiting for Carlos Boozer to come back and save the day... HA HA HA!... it's going to be a long wait.)