If "The Office" folks ran my ward.

Watching the last episode of The Office got me thinking: What if the cast of The Office were all members of a ward?  Given that I was in the Scranton ward for awhile, it does not seem so far fetched to have a few more whack jobs join the clan.  I give you the leadership of the Scranton 2nd Ward.
(Any resemblance to members of my wards, past or present is purely coincidental.  Note to the folks in my own ward: I am no way referring to you in these descriptions.  I am simply trying to describe what it would be like IF a ward was operated by the cast of the Office.) 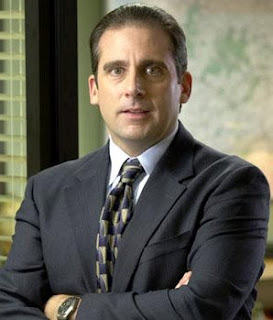 Bishop Michael Scott
Jovial, excitable and slightly self-absorbed, he is always looking out for his congregation; sometimes even giving them an unearned benefit of the doubt.  He will do whatever it takes to keep those under his watch in the fold - from dragging them to rehab to inviting them on river cruises, he is the every man's man.  However, his "that's what she said" line does not go over well in church.
First Councilor, Brother Jim Halpert
The even-keeled, funny man is who most people bring their problems to before even approaching the Bishop.  His easy going nature and personable ways make him approachable and people trust him.  He hates it when people call him, "Brother Tuna".
Second Councilor, Brother Dwight Schrute
This bizarre oddball is clearly pining for Bishop when his time is up.  He spends the bulk of his time studying lesser known church literature and quoting it during Sunday School lessons.  He is the first one to tell the Stake President when he feels that things are not being done by the book and will hold people accountable when they do not meet 100% home teaching for the month.  He also spends countless hours at the cannery, packing beets.
High Priest Group Leader, Brother Creed
Old and senile, no one ever quite has an idea what the heck he is talking about.   He will get up during testimony meeting and ramble on about his various illnesses.
Young Women's President, Sister Pam Beasley
Cool, hip and attractive, she has very little trouble getting along with the young women of the ward.  Hm, sounds like a YW President I know...
Finance Clerk, Kevin Malone
Awful at his job, he is consistently messing up the ward checking account and having to call headquarters.  He also sits in the back row of Elder's quorum and makes "funny" comments that only he laughs at.
The No Calling Guy, Brother Stanley Hudson
The man refuses to do a thing.  However, at the ward ice cream and soup socials, he is the first in line.  If only they had a ward pretzel social.
Activity Committee Chairperson, Sister Angela Martin
She will do whatever it takes to make this year's Christmas party the best in the stake.  If that means renting a Santa Clause and hiring a couple pack mules to play the donkeys in the manger scene, so be it.  To heck with the budget!  Don't even think about messing with her pine cone table decorations.

Relief Society President, Sister Phylis Lapin
Phylis will do anything for anyone and if that means knitting hats for the entire primary, it shall be done  Her skill with a needle and thread also come in handy for homemaking and she makes a marvelous pie.  Being married to Bob Vance, of Vance Refrigeration, also comes in handy when storing all those pies for the scout bake sale.  Her gossipy ways are perfect for keeping up with the latest ward rumblings.
Primary President, Sister Meredith Palmer
Teaching the word of wisdom to children is a natural for this former alcoholic.  Plus, with three children of her own that are primary age, she is the obvious choice.  Also, she can warn the children of the dangers of rabies.
Single Adult Leader, Sister Kelly Kapoor
She would give an excellent fireside.
Scoutmaster, Brother Toby Flenderson
He is trustworthy, loyal, helpful, friendly, courteous, kind, obedient, cheerful, clean and reverent.  What more could you want from a scoutmaster? He also is a twerp that the Bishop hates and that is exactly why he is scoutmaster.
Elder's Quorum President, Andy Bernard
He went to Cornell (The BYU-Idaho of the East) and brags about it, dresses nicely, sings like a bird (or thinks he does) and drives a Nissan Xterra.  Sounds like just about every Elder's Quorum President I have ever known.

Very creative, you hit it right on on their respective callings. The only must see TV on anymore!
Mike

Okay, this was hilarious. You matched them up perfectly. I can totally see them in these callings.

So I guess the bishop thinks I'm a twerp ;)

Steve - I didn't realize you were EQ Pres. I guess it's time to buy an Xterra.

Eric - No, the bishop only thinks the regular scoutmaster is a twerp. The varsity SM is the coolest guy in the ward!

Hit the nail on the head!

How did you know all their last names?