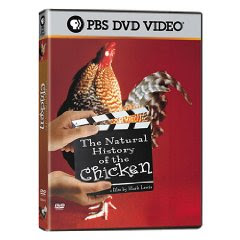 We watched a PBS documentary that we checked out from the library last entitled, "The Natural History of the Chicken."  Emily, another teacher at my school, recommended it because she knew it would be something I would assuredly enjoy, which of course I did.  Watching it for the first time, if you didn't know any better, you would definitely think that it is more mockumentary (directed by Christopher Guest), than documentary.  It details the life of a few lunatics that are undoubtably in love with their pet chickens.
Whoever had the idea for this awkward display and why it was actually filmed, I know not.  The only thing I can think of is that the purpose of this in-depth analysis was to simply entertain the masses with the bizarre behavior of a few chicken loving ignoramuses.
The most insanely idiotic person on the show was a woman that actually puts panties on her chicken.  (They showed panties but not the dreaded "thong" shot, thank goodness.)  She is later shown swimming in her pool with her chicken, washing him with baby shampoo and placing him in a special bed.  But perhaps the most entertaining story of the evening was this one of a woman that saves her chicken using mouth to beak!

The reenactment was just exquisite, was it not?  If firmly believe that this chicken had more to accomplish in this life.  He had been saved for the last days.
If you get a chance, check out this video, or just watch parts 1-6 on youtube.  It's more entertaining than most the crap on TV, without a doubt.  The last story about a chicken that saves it's chicks lives from a hungry hawk reminded me of one of those corny seminary videos.  I kept waiting for the narrator to stop and ask how we could relate the story to the gospel.  Great stuff.

Ok Abe, you've got me stumped on this one. I have no idea if you're being serious about liking this movie or not! When we first signed up to do the Blockbuster By Mail service, we got a few stupid/funny documentaries like this, ones that you wouldn't find in the regular movie store. I didn't see this on on the list though, darn!

No, this one was actually quite funny, but it was made by PBS, so I highly doubt that you would be able to get it at Blockbuster online. You can definitely get it from the county library though.