The topic is "quests" and Cheeseboy's "Perfection is the Quest" tee shirts - now on sale! Only $24.99 each. 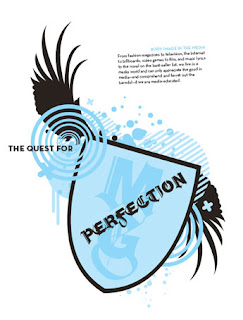 I would like to speak for a moment on the subject of quests.  I have embarked upon a quest unlike any other quest I have ever embarked upon.  My quests generally involve figuring out how to open a bag of chips or finding my car in a huge parking lot after a movie.  I keep my quests simple, easily obtained and uncomplicated.   Nevertheless, today I shall begin the "Cheeseboy Perfection is the Quest!" quest.
You may ask, "Why would you ever want to come across as an arrogant, egocentric pinhead by even hinting that you're even close to perfection?  And why begin a quest that is something as unattainable and pretentious as perfection?"  Very well formed question, hypothetical person that in reality is myself asking myself a question.  Well, the reasons for beginning on such a quest are three fold:
1. As a ploy to sell tee shirts.
2. It is better to try and fail than to never have tried at all.
3. I got a crapload of tee shirts that say "Perfection is the Quest" and I've really got to sell them.
I know what you are thinking, your quest, much like the company Qwest, is nothing but a load of hot gas, or air, depending on which quest you are talking about. "Perfection is the Quest" has a nice ring to it, and it looks great on a tee shirt. My motto last year was "Invested Fully" and those tee shirts sold out in minutes.  I even told my boss about my quest and he had some magical coins made up for me to hand out to all of my relatives.  I am so excited to ultimately fail!
Some may find my perfection antics a bit haughty and dubious.  To you I say, maybe, but I am better than you and so my perfection will come easier.  Some may say that my perfection quest makes me a natural target and enemy to those that are not as paradisiacal or ecclesiastical as I.  To you I say,  you should first aspire to be as good as me, and THEN you can have the perfection quest like I.
Wish me luck, for I am already so close to my goal.  The only thing that stands in my way during this quest are: 1. My various bad habits such as grinding my teeth and biting my nails. 2. The fact that achieving perfection is impossible. 3. A nasty group of speedy, nasty Horned Frogs.  Darn those Horned Frogs!  Darn them to heck!
Nevertheless, you want to buy a tee shirt?
**UPDATE - Some moron reporter wrote an article in the SL Trib today.  Gordon something is his name.  The most damning quote in the article:
1. Pride goes before the fall.
Spin the Quest for Perfection motto any which way you want, but it was a dumb idea. No team should talk about being perfect, not on the field or off it, let alone print it on 50,000 T-shirts screaming: "Kick our a**!"
How did he find out about my quest anyway?!  And what does he mean by "team" anyway?  It's just me Gordon.

What? I'm totally lost. I have no idea what I just read or what you were talking about in this post. But, if you're selling tee shirts, I guess we'll take 7. You can just guess on our sizes.

Haha. Ask Mike what the "Quest for Perfection" was. It has to do with the team down south.