A timeline of how six-year-old complaints are handled from generation to generation. 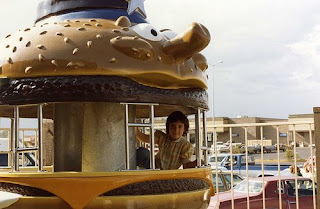 Much like most six year olds, one of Lincoln's favorite pastimes is complaining.  Why just yesterday he was complaining because we were not going to allow him to bring the laptop to Disneyland in December.  A conversation with Cathi ensued and it got me thinking about how a six year old's complaints have changed over the years and how a parent responds.
When I was six: Mom, when are we going to get there?  We have been driving forever!
My parent's response: When I was a kid, we had to drive for hours with no air conditioning.  In fact, when we drove to Disneyland, we had to drive across the desert with nothing but a giant block of ice in our passenger side window to keep us cool, and when that melted my mom would give us giant leaves to fan each other with.  And we loved those leaves!  We were grateful she remembered to pack them.
My six-year-old now: Mom, when are we going to get there?  We have been driving forever!
Our response as parents: Look son, you are one lucky kid.  When we were kids we didn't have laptops or even a DVD player.  We were forced to read books and look for slug bugs.  Sometimes we would even sing songs together!  And I'll tell you something son, we loved it.  We were grateful for those Neil Diamond mixed tapes.  Now play your handheld video game or listen to your iPod.
__________________________________________________________
When I was six: Mom, can we get cable?
My parent's response: Cable?  Cable?!  Do you realize that when I was a kid, we didn't even have television in color?  We had to turn the channel with a knob on the television!  We were even forced to watch episodes of Lawrence Welk until our faces turned pink pastel like the set.  And you know what?  We loved it!  We felt lucky just to have a television, we felt fortunate to have pink, pastel faces.  No, we are not getting cable.
My six year old now: Mom, can you DVR this episode of Spongebob?
Our response as parents: DVR?  DVR?!  Are you kidding son?  We can't DVR it because we already have Oprah and The Daily Show taping right now and it will only allow us to DVR two things at once.  Besides, do you realize that when I was a kid, we had something called a VHS tape machine?  And we could only tape one program at a time, and even then we were lucky if it actually recorded.  Sometimes we even had to adjust something called the "tracking" to get it to play without lines in it.  And then, even if you were lucky enough to actually tape the show you wanted, your sister might come along and tape over your episodes of Get A Life with episodes of Quantum Leap.  It was miserable.
No, I won't DVR this Spongebob, but you can watch one of the 14 episodes we already have DVR'd if you want.
_______________________________________________________________
When I was six: Mom, can we go to McDonalds?
My parent's response: McDonalds?  McDonalds?!  Are you out of your little, six year old mind?  Do you think we are made of money?  Do you know how much it would cost to take the entire family to that place?  Why, a quarter pounder with cheese costs over a dollar.  No, but maybe tomorrow we can go to Millies Burger for the three cheeseburgers for a buck.
My six year old now: Mom, can we go to McDonalds?
Our response as parents: Oh, ugh. Do you really want to go to McDonalds?  Don't you realize that I would like to get up in the morning?  I eat four bites of that stuff and I am like a duck that has been punched in the duck stomach.  I can't breath, can't move, a large pressure pressing on my chest.  No, that stuff is the devil.  Besides, don't you realize how much saturated fat is in that crap?  Those fries are 20% potato, 80% a mixture of fat and acid from that burning oil.  You do want your daddy to be alive in ten years, don't you?
No, we can't go, but maybe we could warm up some chicken nuggets at home and go to Crown Burger tomorrow.

So funny and true Abe!!! It just makes me wonder where the future is heading!!!

I don't remember the name of the character in that picture, but holy crap do I remember playing in that thing. Cooool.

Yeah, I am not sure what that play thing is. The Hamburgler? They definitely had one at our local Micky D's though.