The mystery is finally solved - What Cheeseboy will be for Halloween 08. 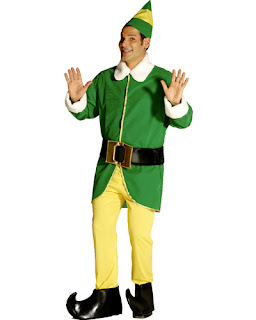 Many of my followers have been inquiring of what I might be for Halloween this year. I understand the curiosity, for I am a man of many mysteries and escapades. In fact, I know that several people walk this earth constantly wondering what I might be doing at that very second and one of those people happens to be me. My blog has created a fiesta of spectacle, a monument to the man and the legend that is... Cheeseboy. I blame no one for their meddlesomeness nature when it comes to peering through the peephole of my life. I say to you, “Peep away, you peepers of inquiring minds. Let my pathetic existence be your playground.”

Anyway, I know you have all been on the edge of your seats (Hopefully if you are reading this on the toilet and you are on the edge of your seat, you have still left ample room for things to drop, if you know what I mean. I'd hate to cause a mess for your wife to clean up.), but before I divulge my festive garb to be skirted around my loins, let me give you a quick rundown of my costumes on Halloween’s gone by.

2004 - I began my teaching career with the basic Barney costume. Cute, yes, but certainly the First Graders were not appreciative of it as it portrayed our class as a bit, shall we say, babyish.

2005 - My mother-in-law had a very authentic Christmas elf costume. Having watched the movie “Elf” over seven times, I was excited to give it the one two. The costume was okay, but I think the kids were confused. The parents also looked a bit perplexed as my look was more of a “gay dwarf” than “Santa’s helper.”

2006 - My neighbor, across the street, just so happens to be a magician commonly referred to as “The Great Schudinni”. He allowed me to borrow his Dumbledor, the Wizard costume. Given that I could not get the hat to stay on and that it came with a very crooked cane, everyone thought that I was actually Moses. While walking through the maze of parents, they kept saying, “Where is the tablets Moses?” and “You should part these people like you did the Red Sea.” I managed the mumble through my 5 inch beard, “I’m Dumbledore, you idiots! Dumbledore!”

2007 - We picked up a very cool Davy Jones pirate costume at the after Halloween sale at the Disney store. It was normally over $100.00, but we got it for a cool $25. It was very cool but a tad scary for the first grade crowd. All those snakes for a beard can be a little off putting for a six year old. Especially when the person wearing the snake beard is your first grade teacher. I am thinking that next year I will be Davy Jones, the Monkey, not the pirate.

2008 - I will be a chicken. Full chicken regalia. I plan on dropping plastic eggs behind me as I walk down the halls. I may actually drop a few pellets too. We’ll see what I am able to round up. I’ll post pictures, but it will likely look like something like this: 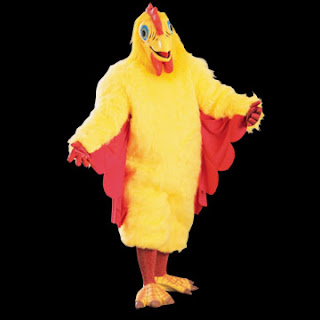 What a great idea! I love the plopping eggs!!

I remember most of those costumes and agree you did look like Moses. What are the odds that two chickens showed up today?

Haha, I know Jackie and Mike! It was sooo bizarre! We must have flown the coop.