Jacob - Are you sure you want to spend election day fixing broken computers all day? 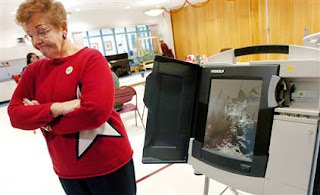 My brother is taking a day off to go work at a polling booth on Election Day. That’s right, my twenty -something-year-old brother believes in democracy so much that he has volunteered his time on this special day to hang around a bunch of elderly women. Of course, I use the term “volunteering” loosely as he will actually be paid for his time. Nevertheless, I actually wish he was working my precinct so that he could find my name on the list in less than 20 minutes.

I swear that I tell those old ladies ten times my last name before they are finally able to locate it on their book of names. “YOSPE - With a Y.” - “Hmm, Barbara, do you see a Yospe on here somewhere? Maybe he is in precinct 4412 and not 4411? Did you say Yospe with a J?” Oh boy, this is much more complicated than it has to be. "Where do you live? Do we need to look at the giant map on the wall to figure out where you live?"

I love the lady that is ready at the helm with the “I voted.” sticker. Maybe that will be my brother’s job. She’s got the sticker half pulled off, ready to plaster onto your chest. On Election Day, I should pull up my shirt so she can paste it right to a patch of nipple hair.
So, as I see it, there are pretty much five jobs at the polling booths:

It kind of reminds me of the ward library, with all these old ladies standing around, pretending to work, and if you don’t fill out the checkout sheet on the counter just perfectly, they squirm and sweat until they melt into the ground in a rage of frustration.

The last time I voted, there was a poll worker knitting. By the time I cast my ballot, she had knitted a full set of leg-warmers. She was just that good.

My guess is that the gist of Jacob’s job will be plugging the computers back in when they accidentally become unplugged. How and why they give a group of 80 year olds computers that they have never used before and expect an election to be a success, I will never know. My grandma just barely figured out how to delete her spam email and we’ve told her over a dozen times how to do it. In fact, I think she still has a cheat sheet posted next to her computer, just in case. (She was deleting her thousands of spam one by one as they came in. She had no idea how to delete them all at once.)

The last time I voted was the primaries and there was a kindhearted old lady in our ward that took my name. When she asked if I was voting Republican or Democrat and I told her Democrat, I swear she gave me quite a little stare of disbelief and shame. As I left, I informed her that I my socialist membership card had not yet arrived in the mail, but I had received my Planned Parent coupon book. Just kidding, but I should have.
Cheers to you Jacob - you have more of a patriotic pulse than I do.
One final note... head on over to my brother's blog. My dad looks very much like Barak Obama's campaign manager.

Abe, I've got the solution for you. Vote by mail! I just called the county clerk's office at 468-3427 and they got me all set up so I will never have to go to the voting booth again.

I don't believe Jake's doing it because of democracy so much as for the $250... Also, i really think voting should be more like giving blood. They should give you a snack, juice. You know.

Even with a simple lst name like "White" it takes the ladies a scan through three or four lists to find me.

"Now how do you spell that?"

"Oh, here you are," they exclaim, "spelled just like the color...now can you confirm your middle initial and address?"

Abe- I fee honored to have a post entirely directed towards me! I am just doing it for the $250. I had to go to two three hour classes that I could have probably completed in ten minutes...but you know how it is to teach old people new things... They are still in need of workers, so if you want to become one, you could join me.

Congrats Jake for being a blog feature. I would do it, but two things - I have to teach that day - and #2 - no.