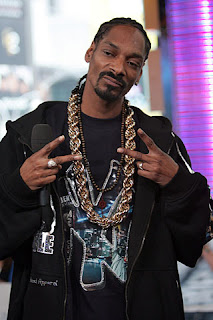 I got a callizzle from one of my best bizzle frizzles, Stevezzle yesterday.  His first question - Do you want to relive our high school days?  I was up for an adventure and with it being a long summer day, I was all in.  The venture on which I was about to embark just happened to be #15 on my bucket list... I was going to see the Godfizzle of rapizzle... Mr... Snoop... Dog. (Oh yeah, and also there was the real reason we went.  One of my favorite bands growing up - 311 - was headlining.)
As I walked into Usana Amphitheater, I felt like I was the misplaced old guy in a MTV Spring Break special.  Young girls wearing anything from low cut sundresses to a thong spotted the arena.  I was just waiting for Carson Daily to step up to the mike and MC.  There was a vast array of people.  I'd say the breakdown was as follows: 60% - White kids ages 15 - 20.  20% - Hip hop fans appropriately dressed in hip hop attire.  10% - Old guys like me and my buddy. And I think the last 10% were
Nilbog Goblins.  (I only say that because after I did the math and it didn't add up to 100%, I had to make something up.)
As we found our seat in the "suites" (The term suite is used loosely at Usana.  Essentially, it is a slab of concrete surrounded by four bars.  And no, there is not a private bathroom.  I looked.)  I wondered if I was the least hip person in the entire audience.  I was thankful when the two people we shared the suite with showed up and one was a clean cut BYU student.  When we asked him if he was a Snoop Dog fan he said, "Yes, but I only like the radio edits.  It will be hard to listen to him swear all the time.  Okay, it was official.  I was not, by a long shot, the biggest loser in the crowd.  The bad news was these dweebs would be sharing a suite with us, making us stick out even more.  Oh well, the show must go on.
The first band was alright.  I can't even remember their name.  The excitement grew as they prepared the stage for Snoop.  There were all sorts of gansta knickknacks like decorative bicycles, cardboard cutouts of booty and swag and I think a hamster cage.  (I will have to check on the hamster cage.  It could have been something else.) Minutes before the grand entering of the D.O.G., parts of his entourage revealed a giant marijuana leaf hovering above the stage.  The air almost immediately filled with the sticky scent of hash and the audience went wild.  And then the introduction.
The lights dimmed, the air filled with more smoke and 1,000 decibels of operatic music swelled through my ears.  The crowed erupted as Snoop, the man emerged from the underground.  He was dressed in what can only be described as a purple, one piece, silk pajama jumpsuit.  On his fist he wore a diamond studded thing-a-mugid and his hair was up in some adorable pigtails. The entertainezzle wizzle on!
Snoop onstage was one thing.  It was what joined him that was quite another.  Besides the band, there were:
I would say that in all there were about 50-70 people on stage at any given time.  The entire episode was disturbing, crash, entertaining and mostly hilarious all at once. 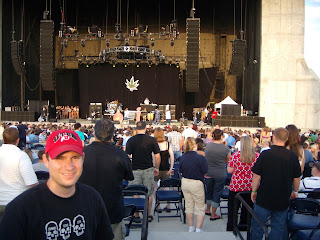 Snoop likes to dedicate songs to certain things. In my opinion, most of Snoop's work is a shrine to either marijuana or sex and  he uses very descriptive language to describe both of them.
Well, not really "descriptive", more umm, "depreciatory".  There is actually one word Snoop really likes to use when talking about his favorite things.  The audience ate up his every move, though.  Each classic Snoop song was met with more enthusiasm.  Snoop knew he was beloved by Utah when the audience started passing him joint after joint to enjoy while performing.  I thought this was a very thoughtful gesture and hopefully he feels as though he is appreciated and welcome here.  I am sure he was wondering where all the black people are.
The highlight of the show was certainly Snoop's cover of House of Pain's "Jump Around".  He got the audience into a hizzle midizzle with that little number.
Snoop closed the show with a benediction and a smoke and it was time to move onto 311.
When I told a 16 year old girl at Sylvan the other day that I would be attending the 311 concert that night, she said, "aren't you a little old for that kind of music?"  To which I replied, "I will have you know that I was listening to 311 before you were even born!"  Which actually made me feel even older and not a lick better.  BUT AT LEAST SHE KNEW!  At least she knew...
This was the third time I had seen 311 but the first time I had seen them since high school.  In a weird set of circumstances, my buddies and I actually met the band backstage when I was about 17.  They were very cool back then and needless to say, they became our heros.
The guys looked old.  I mean, not ancient old, but late 30's old.  It was amazing to me that after all these years they have still developed a very young fan base.  I also wondered, if you are a white rapper/rocker/reggae guy, at what age are you no longer cool?  That is a question certainly worth pondering.
The boys put on quite a show. They highlight of their show was when all 5 played a drum solo - together! I had never seen a band do that before. They have a huge following in Utah for some reason.  Perhaps it is because they seem to stop here every year.  But the audience was very into the music.  I tried to look like I halfway belonged as I bobbed my head to the music and shouted some of the lyrics. For awhile, I even put my hat on backwards. And If I closed my eyes tight enough, I could pretend like I was that 17 year old, long haired kid again, slam dancing and moshing to the music.
Oh yes, back to the Snoop strippers.  During the last three 311 songs, a few of them came up into the suites and started dancing with a few guys in front of us.  Steve and I looked at each other like "Uh, what is this all about?"  Fortunately, they stayed in the suite directly in front of us and did not make a move to join the 30 something year old First Grade teacher and accountant.  They were looking for the high rollers and while we clearly fit the mold, we were married high rollers and we wanted no part of that badonk-a-donk.  It also made me wonder - what profession holds more class - a prostitute or a Snoop Dog dancer?  It is one of those questions you can ponder for years and never find the answer to. 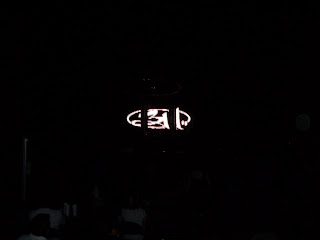 Last night was "fa rizzle"! Glad we could catch up.

Just as an FYI, I've spent several hours today reading your every post since mid-May or something. Hopefully your site counter won't call me out.

We need to get out more often. It was all too obvious last night, that we still got game!

Finally, you've got a nice piece of web real-esate here and ought to consider charging us all a buck and a half to read your wisdom each day.

What a fabulous tribute! I'm NOT a Snoop fan BUT reading about the concert almost made me wish I was :). I'm a bit surprised Snoop and 311 came together??? Mike's a 311 fan. And I'm surprised Cathi would "let" you go!

Welcome Steve to my blog. Please comment anytime. It makes me look popular. I had a great time last night.

Tammy, Cathi didn't have to go, so besides being home alone with the boys, she is pretty cool about letting me go to this kind of stuff...oh and as long as it is free too.

It's just nice to see that you've outgrown 311. You have, haven't you?

Tim, I will still be listening to 311 when other people are changing my diapers again.

Why am I listed in other blogs and CRAP!?

Tammy, because your blog is private, it would not be allowed to be in the new feature "blog scroll" that they have. It is cool...it tells you when your blogger friends have updated their blogs... but it doesn't work if you have a private blog. Sorry.

Thanks for the explanation. At least it makes me feel like I'm not crap for no reason! I'll have to keep an eye on your blog roll to see if I like it. It's kind of annoying to take up more space BUT I wouldn't have to stalk people all the time if I knew when they updated.

Right on brother Ike! Right on.