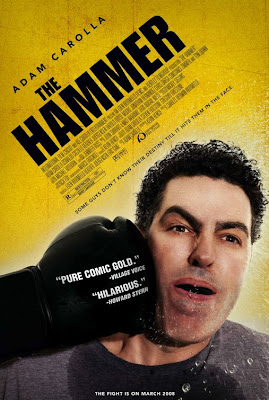 I get most of my ideas for movies to watch from www.rottentomatoes.com .  If the movie has better than a 60% rating, I generally find it worth watching.  If it is less than 50%, it is generally awful.  Between 50-60% is a toss up.
When I saw a movie staring Adam Carolla received a rating of 71%, I knew there had to be a typo.  I mean, this was Adam Carolla; star of The Man Show and genuine pervert.  However, I was compelled to check it out from the library.  71% was a very favorable review and the critics were very kind.
I had not laughed so hard while watching a movie in a long time.  The dialog was extremely clever and there was an actual plot with deep characters and heartfelt emotion.
After the movie ended Cathi and I looked at each other and said, "That was actually quite good."  Amazing... Adam Carolla... movie... quite good... who would have guessed?
When it was over, I looked on the back of the case and noticed it was rated R for "mild language".  I remember a few swear words thrown out here and there, but nothing that you would not hear in a PG-13 movie.
I don't remember a single F bomb, but I am sure that there must have been one.  There was no sex and the only violence was boxing scenes.  There are some major problems with today's movie rating system.

Jana and I were surprised by how much we liked "Drillbit Taylor." We were both expecting to hate it. The night before we rented 10,000 BC and hated it. Don't waste your time with that one.

I copied Drillbit Taylor and will bring it to the cabin for those who haven't seen it yet. I hope I didn't hype it too much because it's just good not great.

Ike, you can find some good in every Appatow creation.