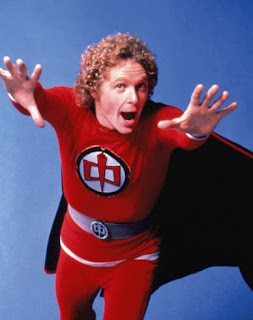 On the 4th of July, Provo has their Freedom Festival/Carnival/Miley Cyrus lap dance/ Happy hour with the Blue Men Group/ Republican party rally/ BYU pep rally.  This is an event where Hoagie Yougie lovers, Caffeine Free Diet Coke drinkers, Clean Flick renters, scooter enthusiasts, free-bee cheapskates and right wing Republicans gather each year to celebrate our country.  They do this by inviting home grown, family friendly entertainment acts that have the innocence and charm of a kitten licking a popsicle.
This year, the folks in charge decided to make things extra special.  They had a brilliant idea that had only been seen previously in the media on shows like The Today Show and Good Morning America.  They invited 3 men in Iraq to join them live via satellite.  Their families would be held in a Cougar holding tank, where they would be able to talk live to their fathers and husbands.  It would be a beautiful moment that would allow all of Happy Valley to hold hands and weep.  Or so they thought.
When the men joined the Provo audience, they were met with cheers and much fanfare.  The audience embraced them as they spoke lovingly to their wives and children.  It was quite a moment as many in the audience were close to tears while watching the reunion of these families.
Before the presentation ended, one soldier had a very special message to share with the Provo audience.  Staff Sgt. Brock Jones stepped forward, unravelled a Ute jersey and yelled into the mike "GO UTES!"
The once heralded, once beloved soldier suddenly became enemy #1.  Boos rained down on him like he had just murdered Cosmo with a pitch fork.  It was surely the epitome of cougar class.  Way to boo a war hero, you stupid zoobies!
On the other hand, I had never been so proud to be an American.  BYU fans can send all the airplanes to our bowl games they want with banners on them like "4th and 19" and then claim it is only Ute fans that care about the rivalry.  But they will not be able to top this.  A true Ute, penetrating their forcefield of shame and guilt, proclaiming his love for the Utes.  Best of all, he was able to spoil their party.  Way to go Sergeant Jones!  You are an inspiration to the entire Ute nation.
***For those of you that are interested, there is some video of this event occurring.  To see it, you need to visit this website.  On the right hand side of the KUTV site, there is a video screen.  On the bottom of the little video screen, scroll over until you find the video entitled, "Party of Patriotism At Stadium of Fire".  Click on that video and you should see a true American and a true Ute.