The Parade of Crappy Candy, Redneck Vehicles and Darling Cloggers 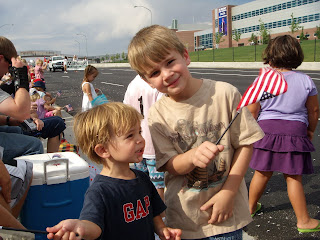 It's the 4th of July in Murray Utah, and the mood is that of festive brilliance.  We have the obligatory Utah Scout flag posted in our front yard and I salute it every time I walk by.
We actually live in the absolute perfect place for 4th of July festivities.  We live 2 blocks from the parade route, we can see the fireworks perfectly from our front yard and there is a guy on our street names "Sam" and I am pretty sure he is someone's uncle.
In this picture the boys are waving their free flags for kids. Luckily, the company that passed them out made sure the tips were sharpened to a deadly point, for the kids.
The Murray parade has to be the largest in Utah on the 4th.  There were plenty of floats and bands.  There were also about 7 floats from surrounding cities.  However, the very best float came from our neighboring stake, the Murray Stake. (We are in Murray South) It had all of the old Murray staples - Two giant smokestacks in the back, the Murray Park archway and the world famous Murray wooden indian. Lincoln loved this one because it had very colorful characters and such familiar landmarks for him.  I hope it wins a prize in the 24th parade. 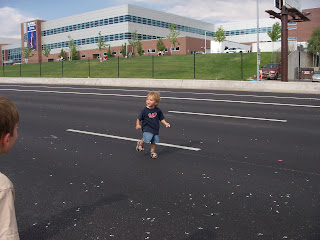 Of course, one of the staples of the community parade is the throwing of the world class crappy candy.  Calder is risking his life by darting out into the street for a simple Tootsie Roll. Had he been trampled by the oncoming old lady cloggers, at least it would have been somewhat worth it...It was a lemon Tootsie Roll.  I love those! 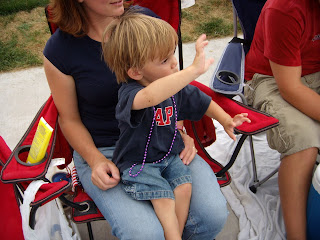 Calder loves to practice his parade wave.  I think here he is waving to the Riverton Days of 47 Royalty.  Actually, it might have been Cottonwood Heights.  Either way, he was waving at ugly girls. 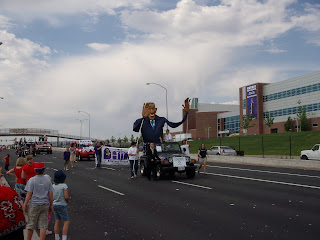 Just when I thought the parade was over,  I saw a giant Barak Obama staring in my direction.  It was good to see him there, since I am endorsing him for President and all.  I am not sure, but I think this float was made out of old sock puppets.
We kept looking for David Archuletta, but since he was too good for Murray, (never mind the enormous banner of him hanging across the street) the giant Barak may have been the most famous thing there... EXCEPT for Mayor Snarr's handlebar mustache of course.
After the parade, I decided to try my first nonstop jog since the 18 miler.  Success!  It felt so good getting out the old running shoes again.  Maybe I will try for the Top of the Mountains marathon in September.
Oh yes.  I almost forgot to tell you about a very fun tradition our neighborhood has.  This guy in our neighborhood owns a huge truck with a water tank on the back.  On the 4th of July they travel around the neighborhood and shoot people with water.  Once you've been drenched, you're invited on the back of the truck to get other people.  By the time they came to our house, there were probably 30 people in the back with water guns and the hose.  They soaked Lincoln and I until we pled for mercy.  We then jumped on board and joined in the hunt.
We sprayed a couple more people and then we headed to the man's McMansion about two blocks up from ours.  He has an enormous hill in his backyard.  He had layed out a long slab of plastic and turned on the sprinklers.  Lincoln was overjoyed with frenzy as he flew down the plastic sheet at breakneck speeds.  What an awesome tradition and a fun day.  We have the coolest neighborhood.

Where's the picture of the special Murray Stake Float?? Great pictures! And it sounds like fun. It sure would be nice to be invited to something so exciting :).

I read your comment about not needing a special section for privates but I think I'm going to keep mine so people will wonder what it is :) but more importantly so I don't forget to check the special people who are private! Otherwise they will get lost in my blog roll. But thanks for thinking of me.