I don't do well with conflict. 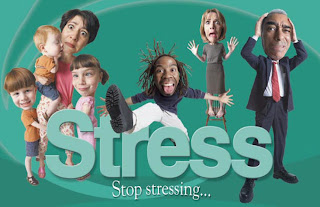 This whole scooter thing still has me very flustered and stressed out.  I shouldn't be - I got the money back, but I just keep replaying the yelling and the fighting in the showroom and the negative vibe that was there.  Even though everything should be A-O.K. and I watched the guy credit my card, and I even received a receipt, I still won't completely worry free until I see that credit on our credit card bill.  Unfortunately, it can take several days for it to show up.  I guess if it doesn't we can always challenge the charge with our credit card company.  I never want to have to call that place back again!
I could not stop thinking about the entire ordeal last night.  I tossed and turned until I finally got out of bed and took two Tylenol PM's.  Today, my stomach has been tossing and turning.  It has to be all stress related from this incident.
I hate confrontation.  I back down from it like a shy little orphan girl that is getting adopted by hungry hyenas.  I get befuddled and rattled until I am so overly traumatized that I do not make rational decisions.  I remember once, when I was working at a call center, a man called to complain that he had not received his software kit that he had ordered months ago. Sensing that I was vulnerable to conflict, he totally took advantage of my weakness.  He belittled me and called me every name in the book until my voice was shaking and I was unable to speak.  I should have just hung up on him, but I was new and was worried about having the call monitored.  I should have just hung up on him though.  When the call ended, I had to go out into the hall to compose myself.  But I will never forget that one man.  Some jobs are just not worth the abuse.
In Junior High I was exiting a classroom.  Little did I know that a very large Tongan boy was running down the hallway at full speed.  His face hit the door that I was opening with such force that it knocked him clean over.  I stood frozen in the middle of the hallway, staring at him.  I had never before felt such overwhelming fear.  In my mind I knew I must say something.  Through my throat I let out an inaudible and perplexingly faint "Are you okay?"
The boy gathered himself, stood up and lifted me by the front of my shirt.  He pinned me against the wall and gave me three solid sucker punches to the gut.  By this time, people had gathered around expecting a full fledged fight.  A full fledged fight was not something I could provide at this time.
I rolled around on the floor, attempting with ever gasp to regain the air that had been knocked out of me.  My voice became that of a overweight, dying toad as I embarrassingly suffered in the middle of D hall and in front of 50 of my peers.  No, there would be no retaliation.  The boy simply walked off, leaving me in the middle of the floor to face death and humiliation.  I knew from a young age that dealing with conflict was not my thing.
I am lucky to have married Cathi.  She is one tough cookie and does much better in conflict situations.  She does not thrive on it, but at least she keeps her composure.
I am sure the stress will subside as time passes and especially when I see that credit on our credit card bill.

Abe I would react the same way. I get flustered and always repeat things in my mind about how I wish they would have gone.

When I worked at the hospital I had to call people. The meanest meanest person I ever talked to on the phone was Wilford Brimley!!! And one time I called a patient back. When he stood up the screw fell out of his glasses. He blamed me!!! He started screaming the F word at me right there in the waiting room. That's been over 15 years ago and I still remember it vividly!

So, I hope you can move on happily and quickly! Good luck!

I wonder what would happen if someone put you and me in a big jar and shook it? I bet my wife could beat up your wife. I'm kidding, but I do let her fight too many of our fights. I'm trying to do better. Sorry to hear about the scooter.

"Before I leave here, I'm going to have somebody's [butt] in my briefcase." Absence of Malice
and
The other quote is when he played the Post Master General on Seinfeld and although I can't find the exact quote, he was pretty dang mean.

I came across this classic website while trying to find the above word for words. It's awesome and shows what an amazing person Brim was. http://www.brainyquote.com/quotes/authors/w/wilford_brimley.html

That BrainyQuest website is cool. I haven't seen it before so thanks for the info!

Oops. I meant BrainyQuote. Not quest but I was on a quest once I found the site!

My husband will tell door-to-door salesman that he likes the products, but he doesn't have any money on him...Why don't they come back later when the wife is home??
And they do... Damn him. Does it every time.

Wait, Tim - Is Wilford dead? And Tammy - you should feel honored to be degraded by a famous person. I can only hope that someone like Alan Thick, or another D list celebrity will call me the F word. And Caradee... your husband sounds a lot like me, although I just let the phone survey people call back to talk to my wife.

Abe, this is Mike E. Being in business, I'm used to alot of conflict and negotiation with insurance companies, vendors, hospital administrators and Physicians. Luckily I've had very little conflict with clients and patients in the 9 years of business. Even though I make choices and decisions everyday, not always correct, I've learned you can't make everybody happy no matter how hard you try to please or accomodate someone. I've learned to let things roll off my back and blow it off and usually forget about it. My wife can't do that and asks me to deal with whatever issues are present. It's a McPheeters thing! We are all hard wired a little different, I think to most individuals it's a good quality to not be combative and avoid confrontation, that's why you're probably a great school teacher and the kids sense it. I could not be a grade school teacher, maybe a college professor. What I'm saying is the sales guy you dealt with is used to disappointing customers selling Chinese products and has learned to deal with disgruntled customers. It's probably no skin off his back and more than likely forgot your disagreement, and you should do the same. Consider this a lesson learned. Next time you want to buy something and need it negotiated or have a conflict with someone, give me a call. Again, in business I deal with this stuff everyday in some capacity. Let it go and quit stressing because not only are you feeling anxiety, but your kids and wife probably feel it with you. Have I written enough? I am bored today and have no desire to clean my garage!

Abe...I totally know how you feel. I obsess about situations like this too! That is another one of my issues in life, besides being skeptical...obsessing over stupid stuff that I have no control over! But, I also know Mike's right....the salesman at the place probably hasn't give you a second thought...so just remember you were in the right and that guy was a JERK!!!

Thanks Mike and Lori. Makes me feel a bit better. I think that in MOST cases, I am able to avoid conflict by using wit and my sense of humor. However, there are the extreme cases where those just don't work, and this was one of them.

Yes, next time I am in a situation like this, perhaps I will give you a call. However, my neighbor I went with is a sales guy and is pretty good in these situations. The scooter guy wouldn't even say a word to him or acknowledge him because "his name wasn't on the contract". So, he when he started saying ANYTHING the guy kicked him out and made him wait in the car.

Anyway, thanks for the encouragement. Fortunately, these situations are very rare. In four years I have yet to have a parent get angry with me. I think it is because I am normally able to diffuse MOST situations.

I guess I must be bored today too because I have written a lot now.