Biff and the Muscle Men 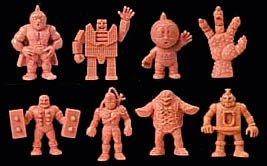 Sixth grade was the year I started collecting my "Muscle Men". It was a new toy fad sweeping the nation and by "nation" I mean all of my friends in Sugarhouse.
Muscle men had to be the cheapest toy ever made that sold for more than ten bucks a package. The premise was simple: Small, pink men that are easily maneuverable by boy sized fingers for battling and other extravaganza. The idea was simple, but the manufactures were brilliant. They followed the Garbage Pail Kid rule of thumb: Make the toy collectable and spread the idea that many of them are rare. Kids will buy them in droves to try and get their
favorites and the continue to buy until they have collected them all. It worked, at least it worked at Uintah Elementary School.

I owned roughly 75 of these collectable figurines. I do not remember how I had that many as I really did not have any money to speak of and my parents assuredly did not purchase more than five for me. I can only assume that as the most popular kid in the 6th grade, I was simply given them by fellas that wanted to be my friend. I recall being friends with just about everyone back then. Now I know why. 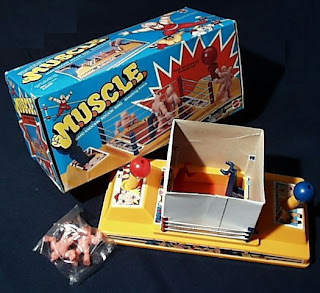 Even though I probably had more Muscle Men than anyone in school, I wanted more than anything to own the Muscle Men toy that was unmatched by any other. The cream of the crop. The superlative trophy. The supreme wrestling status symbol... The Muscle Man Wrestling Ring!

I knew my parents would not fork out $29.99 for a plastic piece of crap that looked like small box with two forks in it. I also knew most of my good friends also had parents with an equally level head and a frugal mind. My birthday was in April and I had only one choice - invite Peter.

Peter was a casual friend. I never played with him at recess much as he was always involved in make believe robot games or playing in his "Choose Your Own Adventure" secret club. I, on the other hand, would be playing football, (tackle only when teachers were not looking) basketball or soccer. Peter also had a problem with nose picking. His nickname was "Biff" and on more than one occasion, our teacher, who was known as being quite rude, interrupted one of Biff's nose picking sessions. "BIFF", he would say: "Pick a winner?" Needless to say, "Pick a winner Biff?" became one of the most recognizable quotes around the school yard.
It was well known by all that Biff's parents had a lot of money. Several of the other members of his Choose Your Own Adventure club had told me of the awesome gifts he had given them at their parties. My parents, being the compassionate disciplinarians that they were, informed me that I was to only invite 5 boys to my party. This was quite a quandary. Five boys? Well, I was friends with at least quadruple that! I must choose wisely.

I was in my 3rd day of fasting and prayer when the realization came to me to invite Peter. Who cares that when we went to the museum and had to place items in a tray to grow mold, he threw in three buggers? Who cares if he still brought a light saber to school in his backpack? Who even cares that he was able to crack bones I had never heard crack before! He was to become one of my best fake friends in the whole world, especially if he could buy me a Muscle Men Wresting Ring.
After I had passed out the invites, word quickly spread around school about who was invited to my party. More importantly, word as to who was not invited spread even faster. Even though I felt the brunt of the jealousy, anger and resentment, I was content with my decisions. I did what I had to do. It was that simple.
As I recall, the party was exceptional and the gifts were ultra cool. I had mentioned to Peter that I had wanted a wrestling ring, but I was sure my parents would not be purchasing it for me. I can still see the glow in Peter's eyes as he heavy heavy hangovered my poor head that night. He was more excited to give me that gift than I was to receive it. This was his ticket into the cool zone. "Biff the picker" would soon become "Peter the amazing". A twinge of guilt fell through my body as a ravaged through the Snoopy paper to the box. I had used this poor sap and the poor sap was using me. At that moment, I promised myself that I would be extra nice to Biff, err Peter, for the rest of the year.
The Muscle Men wrestling ring is the best present I got that year...twice! My parents had been listening, and despite their repeated warnings that they would not be giving me a 30 dollar piece of plastic crap, (in so many words) they came through big time. I was grateful for both the rings, but for some reason, the Biff ring was more valuable to me. Even though he had not payed a dime for it, he knew it was his best shot at my friendship. I held onto Peter's toy and gave the other one to my best friend Craig at his birthday party.
Speaking of birthday parties, Biff's birthday just so happened to be the next month. I was the only non-Choose Your Own Adventurer that was on the guest list. Despite this normally disheartening fact, I merrily went, fully expecting an average to below average time. Sure enough, we played Dungeons and Dragons, watched "Caveman" and ate Chinese food.
Even as an eleven year old boy, I could tell that Caveman was assuredly the lamest movie I had ever seen. And even though I had played Dungeons and Dragons with my normal friends, these guys took the game to a new level. Even if I had been a 4th degree Dungeon Master, I still would have been dreadfully lost. Yet, I persevered through the sleepover and at times I found myself actually enjoying the company of the geeks. I was proud of that night and at that moment I felt as though I had graduated from Elementary School.
Never again did I call Peter "Biff". We ended the school year as much closer friends.  I think once or twice I may have even played Choose Your Own Adventure with him during recess. Okay, I may not have actually played, but I am pretty sure I was an honorary member of the club anyway.