What happened to Calder?

Do you remember the episode of Sesame Street in which Cookie Monster sneaks a cookie?  I know what you are thinking: That is every episode, you crazy imbecile!  Well sure, but in the one that I am thinking of, Cookie Monster takes one small bite of a cookie.  In effort to conceal the bite, he tries to round out the rest of the cookie with several more bites.  Of course, the cookie is never again completely balanced and more and more bites were needed.  In the end, Cookie Monster was left with a few crumbs on his plate, wondering how he could allow this to happen.  Riveting television.
Well we decided to get Calder's hair cut yesterday.  What started as a trim became a rapid and
uncontrollable progression to this: 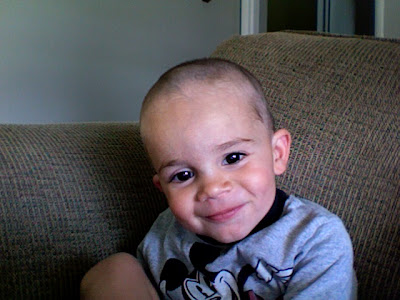 Oops.
Looks a lot like Lincoln, doesn't he?  I have noticed that with his new hair style he has much more pointed ears than Lincoln, but even bigger eyes.
He went from this... 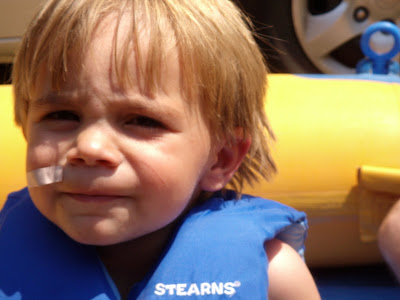 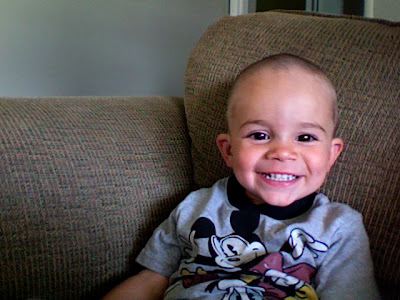 Wow!
It has taken some getting used to and Cathi was worried at first that he looked like a cancer patient, but it has really grown on us.  It is a little sad because he would get so many compliments on his hair.  But given that he could care less and that the compliments were more for his parent's egos, this hairdo will do just fine for the next couple of months.
Fortunately, he still has his super silly and very determined personality and he is still cute as beans, so we have come to accept it.  I hope, of course, that he is as cute as navy beans and not lima beans, because lima beans are just gross.  I certainly hope he is not as cute as Mr. Bean because that, my friends would be a new low for a 2 year old.
And no Grandma, we have no hard feelings.  You have given our kids so many cute haircuts and saved us so much money over the years, you are allowed this one mistake that turned out to be quite funny.

Yeah, I've done that so many times. Took me years to not mess up to the point of shaving it off. I think it's cute

I think he looks great! But I know what you mean about not sure if you should do it because YOU get compliments on HIS hair :).

I love the new look....he looks so much older with it though! This is just one of the many steps he'll take in following Lincoln's footsteps....as Lincoln's usually goes for the summer buzz cut as well.

Whew! Thanks for the vote of confidence. I think he looks adorable!

I say run with the cancer bit. Slap his picture on a bunch of old peanut butter jars and spread them around the local convenience stores with a sad little story and call it his first summer job. It's just a thought.

P.S. I can't believe that RC Willey hot dogs didn't make the poll. Those are always my favorite.

Thanks everyone for your support. Together, we can get through this haircut.

Tim, yes, I thought about RC Willey the other day, but it was too late to add it to the poll, once someone votes.