No stand up dentists aloud! 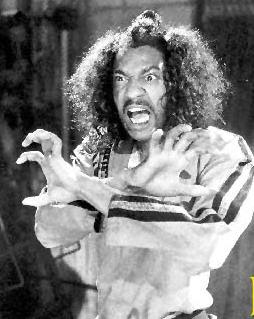 I had three cavities to fill yesterday.  That is three more than I had before I was 17 years old.  The dentist tells me that the acid from my acid reflux is ruining my teeth too.  Sometimes it seems like I am running from one health scare from another.  I run myself in circles and I end up right back with the same health problem. Only when I see it again, it has mutated and it now wants to swallow my teeth.
We have a new dentist who I really like.  Unfortunately, he also is downright funny.  I am not an anti-dentite or anything, but a funny dentist need not be funny while dentisting.
The dentist had numbed the bottom half of my mouth.  From my viewpoint, there was a clamp on my gum that looked a little like a rounded clothespin with a small Betty Boop logo on it.  (Again, I could only see it by looking straight down my nose.  It was a weird angle.)  I also had 3 large pieces of guaze pads surrounding the tooth that was to be excavated.  I was in no position to be entertained.
While preparing his dentist devices and tools, the dentist begins to tell me about how he had purchased some old Kung Fu movies that he loved as a boy.  He then goes on to explain how he took these Kung Fu movies on a road trip recently with his four boys (ages 4 - 15).  He then starts talking like one of his boys in a high sing song voice.  "Dad, this movie is really boring! Dad, they aren't even really punching each other.  I don't understand anything they are saying Dad!"
Okay, this may not be funny just reading it, but while your dentist is standing over you with a pick ax and a 30 bit drill, it can become a little humorous.  I began to chuckle and then a constant vocal laugh began to escape my pried open mouth.  When I laughed, a gauze pad slipped slightly down my throat and I began to cough.  The dentist then says to me, "Now really is not the time to laugh."  I gathered myself and replied, "Uh, owka, sowee."

I'm glad you really like our new dentist! And if it makes you feel better (and not so alone) the acid from my acid reflux also affected my back teeth. That's the main reason I decided to have my reflux fixed!

I've never thought of him as funny but he is a really nice guy who is funny without trying to be. Kind of like you :).

Hey, I will have you know I try sometimes to be funny. That is usually when I am not.

Dr.Duncan used to ask you questions? Figure that one out...by the time his hand was out of your mouth you had completely forgotten the question (but so had he)

ha Abe. After re-reading my comment, maybe that didn't come out as it should have. I didn't mean to imply you AREN'T funny. Everytime I watch Everybody Loves Raymond (which is every day at least one episode) I always think of you because he is really funny (to me) and for some reason he does things I think you would do. Funny!