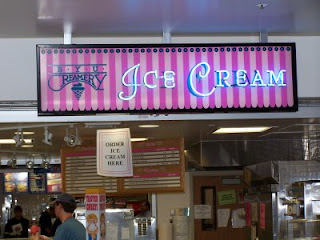 I have a few "zoobie" friends, some of which, amazingly enough, I actually am quite fond of. If you are not quite sure what a zoobie is, apparently you are not alone. For years - in fact, before time even began; long before the dinosaur, BYU students and fans have been known as "zoobies". If you are not sure how the word "zoobie" came into existence and have more than a few minutes of free time on your hands, read this article. If your interest level is at a medium, please read the next paragraph. If your level of interest is low, I would invite you to stop reading this blog and go about your business plucking your eyebrows or catching stingrays with your bare hands. However, I appreciate your readership and would hate for you to miss out on this: the opportunity of the lifetime - to learn how to spot and identify a zoobie.

A "zoobie" is a slang term used to describe to the previously mentioned BYU student or fan. The name stems from the fact that BYU is zoo like in nature; or more appropriately, that BYU students act as though they are animals in a zoo. They are forced together (sometimes against their will) to find mates and they then breed as often as possible for the rest of their lives. The "zookeepers" or BYU faculty, keep the peace by providing enormous amounts of ice cream from the BYU creamery to their appease the annoyingly unhostile captives.

Side note: It has also been argued that "zoobie" refers to the fact that BYU students are pent up, kept away from the world like animals; almost as if they live life in a bubble. Of course, we all know that this is not true; BYU students live in Provo, which is more like a giant plastic tube than a bubble.

Thus, I have come to the gist of this rant: this morning while I was perusing the Deseret News (a zoobie publication to be sure), I ran across this doozy of an article. Again, if you are too lazy to actually read an article, allow me to paraphrase. Said article states the unthinkable: the BYU creamery is almost out of ice cream! For my zoob friends that may have missed that, allow me to repeat... BYU is almost out of ice cream! The Happy Valley panic attack of '09 has thus begun.

Now, the BYU creamery serves a single and sacred purpose: to squelch the potential misdeeds and sinery of a giant (giant meaning "of great size" both collectively and individually) student body by using a delicious, sugary, luscious delicacy. Granted, ice cream of the Ben and Jerry's sort is still on tap at the local grocers. However, one must travel off campus; perhaps walking past the Albertsons booze section, perhaps having to stare into the shadow of death itself, before finally making it to the frozen food section. Plus, Ben and Jerry make a variety of coffee flavored creams and we just can't have that.

Will the zoobies survive? Will the BYU campus fall into chaos and perhaps - gasp - make itself more thin? Will BYU students rally to save the creamery and their own morality in the process? Will the plastic tubing that encases Zoobieville explode into a million pieces and float away in a river of melted ice cream tears? Stay tuned...

Or don't - depending on if you have read this far or not. I doubt anyone is still left out there.

*** Cheeseboy health update: I felt okay today, but still managed to throw up once. I may have overdone it by working on the bathroom; bathroom induced vomiting - never a good thing. I did however, check my chest and found a few new hairs sprouting. I gave them some words of encouragement and buttoned up. Later, Cathi spotted a new eyebrow hair so long that it was wagging across my eyeball. (I thought it was an eyelash) She also informed me that it was grey! Am I, at age 33, already growing long, disgusting eyebrows like the old man up the street? Do I have hairs hanging out of my ears like a ragged, sloppy, disregarded Sesame Street puppet?

Fortunately, I know that the long, grey eyebrow strand has only made an appearance as a byproduct of all the manly body hair that has been taking place as of late.

Abe and your crazy stories. I think the only reason you cared to write about this was for your love of ice cream. We all know that anything else BYU related would be shot down like a wasp nest. PS-Hope you fully recover soon. I (Lyndsay) had a 24-hour bout with the flu and I, too, felt like my belly button was a pencil sharpner.

I can't believe I am saying this but I think you are being a little hard on BYU. They actually are real people and once you get them away from the campus act almost human. You can bet though that the ice cream will be good. Go in and ask for the mocha chocolate flavor and see what happens.
Dad

Other ideas for flavors might include:
"Jack Daniels Gelato"
"Bud Blueberry"
"Cougar Tracks and Droppings"
"Popcorn Vanilla" (just look out your window)
"Green Tea Tiramsu"
"Celestial Carmel"
"Rocky Road Romance"
"I hope they call me on a mission Marshmellow"
"The RM" which is Reeses Pieces Mashed.
and finally....
"Sweet Spirit Strawberry" -

Thank you for your concern Lyndsay. I know I seem like an ice cream man, but I actually much prefer the cream of the sherbert variety.

Dad - I know I am being hard on them. Your flavors are incredibly creative though. Do you happen to be in marketing?

Okay I just read that ice cream article and want my 2 minutes back.

Here's the jist: BYU Creamery running low on ice cream but should have enough to get by. How is that a story?