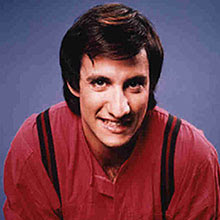 One of my favorite former students, a boy I shall call "Dave", emailed me today. I had him in the first grade and he then qualified for ALPS (Accelerated Learning Program) and moved to the school that I am now moving to. (Are you following? Because I am not sure I am following myself. I think that I have myself teaching in Neverland.) I believe he is now going into the fourth grade. Here is his email:

Hi, Mr. Yospe! When I heard you were coming to [my school], I was SO excited!!! :D Funny thing was, the very next day, I wanted to go to school more than ever!!! This last Sunday, at church, I told Mrs. [teacher at my old school that goes to his ward] that you were coming to [new school], and she said she was jealous. If I hear anyone get your name wrong, or prenounces your name wrong, I will tell them how it's said correctly ( because I don't think people are used to those types of hard names).

Great email, right? The funny thing is that he is right on the money (and he probably only has a few dollars in a savings account his grandma set up for him) - You are right, Dave - people are NOT used to those types of hard names!

When coupled with my full first name, Abram, to those that have not met me, I suddenly become a freakish immigrant from Eastern Europe. In fact, when Cathi had Calder, the nurses were taken aback when I finally came in for an appointment. They were flabbergasted that I was an actual normal looking white guy that spoke perfect English. Apparently, having only seen my full name, they had me pegged as either Balki Bartacamous or a bearded, Middle Eastern Jewish man. I wish I could say I was both.

In college Communications 101, we were required to interview and record each other in class. During the next semester, my cousin took Communications 101 and their class used these same tapes for an assignment. The instructor dumped the pile of tapes into the center of the room so as the students could select one to listen to. According to my cousin, nobody wanted to touch mine, because with a name like "Abram Yospe", they assumed that I would be difficult to understand.

Now, I wouldn't say that my English is perfect, but it is the only language I know. (Besides the "language of love", but you will have to take Cathi's word for it.) I learned English from an early age, and despite the fact that my last name is "Yospe" and my great-grandparents were from Russia, I feel confident in my ability to communicate. Sometimes I drool a bit while talking, but that is only because occasionally I am too lazy to actually use my tongue. (Again, except when I speak the "language of love", but only Cathi would know my skill in speaking in tongues.)

You may or may not know, but I do speak the "language of love". I have become well versed in this language. I am basically self taught, but received some minor tutelage from Marvin Gaye and the Fonze. I hate to brag (except about my ability to speak the language of love), but I speak this language like a Jedi Master. However, you really are going to have to take my wife's word for it.

ANYWAY, I guess what I am really trying to say is that I have a bit of a strange name. I am not sure if it fits my strange personality, but I will take it. Just call me Abe... or if we are online, call me "Cheeseboy" to protect my identity.

Great thinking post Abe. I'd never thought about your full name sounding un-american but now that I've read it I can see how it happens. I would rather have Yospe than my maiden name though. Lots of teasing goes along with it! At least yours just gets said incorrectly.

As you are already aware, I have had a run-in with another "yos-pee" in my life, though his named was spelled "Jospe"- see, it could be worse. No one ever knows what to do with a "J" in a name. This post has inspired me to dig up my box of stuff from Jerusalem and figure out his first name though, since I can't remember it.

Abe I didn't know you're Russian... kind of. I will now forever picture you in a monochrome Nike jogging suit with gold chains and a cigarette!

That's a really sweet email from that kiddo!! It made me feel warm & fuzzy just reading it!!
Check out my "name is a name is a name" post, if you want. I go by my middle name, it's rediculous. My first name is RACHEL. Like, the easiest name ( besides Ann, thats simple..) and even that people spell wrong, or get confused which name I go by, or why.. I need a name like Cheeseman to just say "Look doc, it's not Rach.. it's ______" get with the program!