DVR has profoundly changed my life. 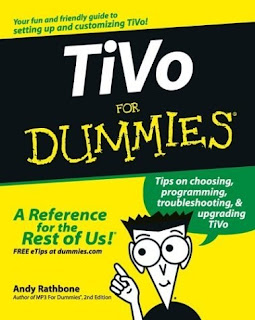 DVR (TiVo) is the invention of the century. Not a single other apparatus, gizmo or contraption hatched in the last 100 years (what is that, a millennium?) even comes close. Nothing that any inventor has created in my lifetime has personally benefited me and my lifestyle more. DVR is the mother of all other electronic gadgets.

I will admit that before DVR, I was an irritating twit of a remote hog. I was so bad that I was constantly being attacked by a barrage of "Just leave it on one stupid station!". I'd twiddle the remote like I twiddle my thumbs; endlessly racing from one end of the dial to the other, never fully satisfied. My beloved wife, on the other hand, would grind her teeth and swear at me under her breath. The DVR was my vaccine for this ailment.

Before DVR, I would find myself watching the lamest shows on the planet. Not only every show on my planet, but every show on the Animal Planet, the Safari Planet and the planet that remodels itself every hour using nothing more than a carpenter, a designer and magic planet dust.

With my DVR (I shall call her "Bronson" after the late, great Bronson Pinchot of "Perfect Strangers fame) my tendency to waste time on shows such as "Rock of Love" or "Model Training" has disappeared. Bronson simply won't allow it. She snaps and growls at the notion of crappy programming - and believe me, hearing your DVR machine snap and growl can be a very disconcerting; especially if your wife tells you she can't hear it.

By the way, "Model Training" is about folks that have toy train models in their basements and in no way involves Tyra Banks - unless of course, Tyra begins the relaxing and engaging hobby of model training, in which case, she would be a natural celebrity guest.

Finally, thanks to Bronson, mine eyes have seen the glory of significantly less tube time. I find myself watching what I taped and nothing else. I now have much more time for writing, reading and telling my son to stop biting his toenails.

The down side is that there are likely quite a few shows out there that I have no idea even exist. I do not watch commercials, I rarely read about new shows and I never channel surf. For all I know, Win Lose or Draw has returned to prime time, and here I am watching Property Flippers for the 9th time today. ("Property Flippers" is not to be confused with "Properly Flippers" - a documentary series about a group of dolphins that get together for tea and crumpets)

Burt Reynolds always drew the best pictures on that show.

So keep your tomfoolery high tech iPhones and your complex garage door openers. For me and my house - we are DVR people. Thank you for inventing it Al Gore! First the internets (a series of tubes) and then the DVR machine; truly you are this generation's Ben Franklin.

OK, I'm checking once again to see if this site will accept my comment. Hmmm...let's see!

Hey, I've always been posting on Open ID, but now it's making me sign in on Google. Why is this happening to me?

I've noticed that too. We tivo a lot of shows off of the Discovery Chanel and the Food Network chanel, but I'm sure we are missing a whole bunch of new shows.

I am the only person in the country who does not have Tivo. My husband thinks we will end up watching more TV. So we are still channel flippers and only watch bits of shows here and there as we flip and get stuck on one show and then during a commercial, flip to another show. I end up watching things like Rock of Love cause it plays at all times in the day so if there is ever nothing on... Rock of Love is on. It's always on. I need Tivo...

"Rock of Love" is not crappy tv! However, I don't love Bret Michaels as much as I used to before his show.

I agree with TiVo changing my life, along with digital cameras and the internet! I had to really be talked into all 3 things and now I could never live without them! Plus my newest love . . . XM satellite radio.

Tammy, Rock of Love is absolute and total garbage. I'm sure you are in the minority on that one.

Lindsey - Get a TiVo