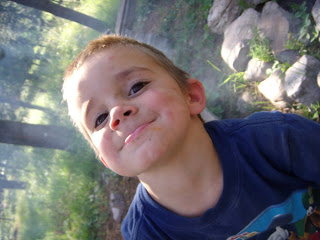 I haven't had this much trouble potty training since I was like eleven.

Calder is three and a half years old. This is the fifth time that we have tried to potty train him. He is a strange, bullheaded boy.

Our Pediatrician informed us at our last visit that the best way to potty train him would be to simply place some underoo underwear on him one morning, show him the toilet and tell him, "okay, here is the potty, you sit on it when you need to go; you are now potty trained."

The doc said that if he pooped his pants, you do not change him; you allow him to walk around in his feces for 10 minutes. When you do finally change him, you must be very discreet and not give the boy any attention at all.

Our Pediatrician was under the assumption that Calder was a "normal" boy.

In our previous attempts, Calder would poop his pants and then walk around the house with it dripping down his legs, as if he was a midget sized, portable chocolate fountain. The poop would not phase him; I believe he saw it as a warm mud bath for his thighs.

Here we were, allowing him to leave a new aged, brown trail of tears across our living room, while we hoped that he would somehow find it uncomfortable. We threw away five pairs of underpants; Mickey Mouse had a brown turban, Spiderman's webs were muddy and Thomas the Train was stuck in the mud.

Calder is a good kid, he really is. However, forcing Calder to do something to do something he does not want to do is a little like asking asking Paula Abdul to say something reasonably sane. He is brutally stubborn - stubborn like a mule in fact (if the mule was an adorable, wacky three year old boy. Or, if the mule wore diapers - mule diapers - and refused to even think about sitting on a toilet. (Mule diapers would have to be pretty large.))

So alas, here we are - fifth time's the charm. It's not like he can't do it. In fact, he probably could have done it at age two. It's almost like... no he is mocking us. He gets a kick out of knowing mommy and daddy are gagging every time he eats corn. He loves the fact that he can pee directly into his shorts and his mom has to clean it up.

I will keep you abreast of the situation.

That Calder! Oh! He is a stubborn one.

I do not envy you. There is nothing fun about potty training. My sister is going through the same thing with her 3 1/2 year old boy right now too.

EWWWW! Gross! Nathan wouldn't potty train until he was 3 1/2 either. Stubborn kids! However, when HE finally made the decision, it was done in one day.

One of my boys, who shall remain nameless, was almost 4 when he was potty trained. Never fear. He turned out reasonably normal. I figure if they are potty trained by the time they start school, who cares? You will have something to harrass him about until he goes on his mission.

Thanks Aunt Chrisy. Makes me feel better. So far the potty training this time is going, well... not so good.

OK...sick, but oh so funny! Just a reminder, Calder has made a difference in the world with his many attempts to potty train. Maddie potty trained because of him. I'll never forget the "code words" we heard around here for 2 months..."Pee-pee potty Calder."