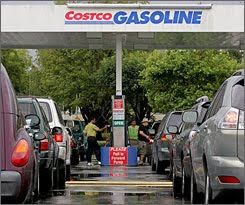 I hereby issue a cease to exist order for the following items:

2. Movies where the entire plot involves a husband and wife fighting for two hours. Okay, I'll admit, I have really only seen one movie like this recently: Revolutionary Road. The wife and I endured two hours of squeeling last night in what turned out to be just an extended, torturous scream session. I expected better; a Leonardo and Kate Winslet reunion seemed like a recipe for success. Alas, there would be no drawing scene, no king of the world, or lost diamonds. However, strangely enough, both movies did involve a sinking ships; Revolutionary Road just took two less hours.

3. Lowes/Home Depot - In the past month and a half I have been to these two shops more than 20 times; sometimes going as much as three times a day. That is an estimate, but it is highly accurate. (Estimation is the one math concept I may have mastered) They don't have to cease to exist forever - I just don't want to enter one again until at least December.

4. Robin Williams rants on talk shows. Now, Robin Williams is a fantastic actor (in 50% of his movies, the other 50% are clearly awful - RV and Patch Adams come to mind), but when I watch him get interviewed, I am either too dumb or slow to follow along or he is talking simple gibberish. I'm going to go ahead and say it's the latter. The funny thing is that the studio audience laughs at his every joke, and I am positive they have no idea what they are even laughing at; only that he is using a silly voice like he did in Aladin.

5. Costco gas. Costco - I like your cheap gas, but what is with all the hassle? First I have to join your secret club and get your secret membership card. I thus have to fork out $40 a year just for the PRIVILEGE to be in your club and buy your gas. Then, only if I am lucky enough to get in your bulky fraternity, I have to use an ATM card or an American Express. Excuse me, but do you think you are the only store on the planet that is too good to take Visa or Mastercard? Get over yourself Costco! I know at of at least 10 gas stations that are just as pretty and I don't even have to wait in line. Sometimes 5 cents per gallon is just not worth it.

I can't stand Robin Williams on talk shows either. He's all over the place. I wonder if that's how he is during movies too but maybe they just have to take twice as many takes and cut out a lot of his craziness in order to show his acting abilities.

Two years ago I broke the chains of Costco membership, and I can't tell you how FREE I feel. And I realized that I saved more money in the long run by staying away from that place.

I thought there was no place on earth like Costco, but having just come back from a trip to Cairo and walking through a dingy marketplace where the greasy tools were sitting next to the goat heads, I realized there's another place very similar to Costco, miles away.

Margaret - funny! Does the Egypt version of Costco have old ladies handing out free samples?