Lavar Burton just shed a tear, but you don't have to take my word for it.

Reading Rainbow is dead to me. Actually, it is dead to everyone. Lavar Burton has packed up his earring and left the building. Canceled.

I remember when Reading Rainbow first went on the air. It was such a novel concept: You can read books... and do it while you watch TV. It was like combining something I loved with something I tolerated. In fact, it was a little bit like going to the football game, but having to do the wave.

Back in the day, Reading Rainbow was the Oprah's book club for kids. Each show highlighted three books that were recently published and after the show aired, the books immediately made the best seller list.

Undoubtedly, Reading Rainbow will be best remembered for the glowy, flowy theme song.

Butterfly in the sky. I can go twice as high.
Take a look. It's in a book. It's Reading Rainbow.

After listening to that song every day for 180 days in 4th grade, I felt like I COULD do anything. And t 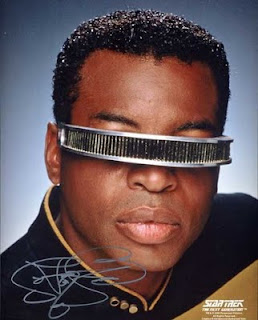 hen, Lavar Burton would show up and read a book and "anything" became sitting at my desk and hoping the recess bell would ring.

So R.I.P. Reading Rainbow. Go - take your place on a throne in PBS heaven, which looks amazingly similar to 'Mr. Roger's Land of Make Believe'. While you are there, say hi to that weird show that my dad used to watch about the traveling vet in England. Perhaps you can swing by that bearded guy's pad that paints the happy little clouds?

And of course, a trip to PBS heaven would not be complete without visiting that wacky 80's aerobic show. You know the one - it came on before any Saturday morning cartoon and had three podiums, one for the three different skill levels. I always wanted to get to the high level, but I just couldn't kick my leg up that high. Even as a kid, I wasn't what you would call "bendy". I also had a bit of a crush on the girl on the medium platform with the long legs and the adorable leg warmers. She was something special... something real special.

If you go, just be sure to check your pulse after each workout.

**Update - Thanks to Lori, I now know that show was called "Hooked on Aerobics". I had totally forgotten about the mustached man on the low platform. While researching this further, I learned that the show was actually made and produced at BYU and soon became a worldwide phenomenon. Also, as it is a BYU production, this is how Max Hall and Bronco Mendenhall stay in shape during the off season. 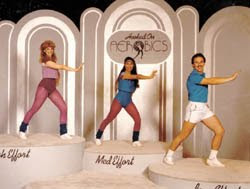 I guess this means you haven't been playing "Reading Rainbow" for your first graders. Great, you've cheated them! That is one of the few memories I have from grade school, watching Reading Rainbow. That, and the guy dressed up in a "body" suit. You know the one...what was that show?

I remember watching (and moving to) "Hooked on Aerobics" and it's funny that you didn't know the name of it even thought it's on their wonderful stage :)

I've never seen "Reading Rainbow". I was too old for it by the time it made it's appearance.

Luckily Lavar Burton can still pop up occasionally on The Soup, so he hasn't faded completely away.

I so remember watching that! I knew exactly what you were talking about when you said eighties aerobics. That is too funny.

I so remember watching that! I knew exactly what you were talking about when you said eighties aerobics. That is too funny.

I LOVED Reading Rainbow and thought Lavar Burton had the best job in the world. Still do.

We haven't had Reading Rainbow in our market out here for years, so I have already mourned the death of the show.