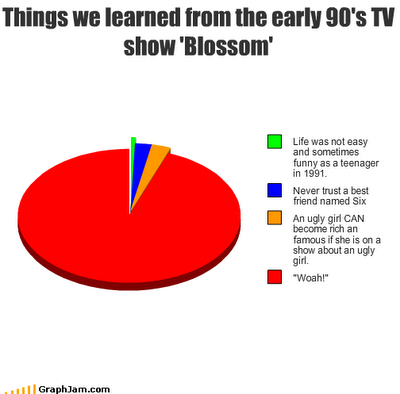 Did you know that the actress who played blossom was just on the TLC show "What Not to Wear"? Apparently her family and friends couldn't handle her ugly wardrobe anymore neither!

Funny Clarissa. I just saw a clip of her getting interviewed because she potty trains her kid from age 6 months or something.

Did you see her on Chelsea Lately? (don't think this is an endorsement- I usually don't watch that show, but I was told to watch it because Blossom was on) Apparently she married a Mormon from Utah who converted to Judaism (she is Jewish). She said his family is very nice and they come to family events here in Utah where there is a lot of food served which isn't kosher so she can't eat it...

I saw her on Chelsea Lately too.

And (about your poll) I still know the entire opening theme to the Polka Dot Door. I loved that show.

I remember seeing this show but I don't remember much about it other than Joey and Six who I always thought was named Sex.

Hmmm. Have I seen this show? You should have put a photo of Blossom on your post!