I have many irrational fears, but only one involves getting beheaded. 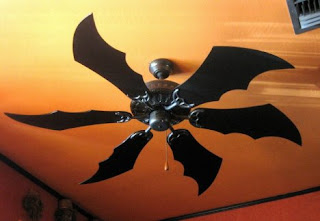 I just finished reading What Are You Afraid Of?, a book about teenagers with strange and - what the author claimed as - "strange" phobias. The book was clearly written for teenagers and came off a bit too preachy and heavy handed for my taste. It was almost like the author(s) were saying, "Look at this wacko that is scared of getting fat. That could be YOU, young lady if you don't stop exercising so much!"

Anyhow, while reading this atrocity, I was reminded of all of my neurotic, perplexing phobias. I thought of many (including my hypochondriac insanity and my unnerving and prejudice fear of midgets), however, I have chosen to write about just one; the one that may actually kill me.

Above our bed there is a ceiling fan. We hate each other like Tom and Jerry, which is strange because I essentially gave birth to the wretched thing. I picked it out of a Walmart lineup like it was the cutest in a line of ugly orphans. I hired the guy to come hook it up. I personally watched the guy stand on my bed and screw it into the ceiling. The ceiling fan is alive because of me! And yet it hates me. Perhaps it has a ceiling fan Daddy complex?

It started with a jerk - more of a shake or a shimmy, but that $25 piece of crap started moving on me. It startled me the first time it happened. It wasn't much, but it scared me enough to give me nightmares that night.

In my dream, the light bulb of the ceiling fan becomes a sharp, jagged mouth. It began laughing at me, a demented precursor to what would happen next. The ceiling fan then began to shake loose, it's arms becoming short, stubby human arms. It finally freed itself, flung through the air and decapitated me with one slice. As my head fell to the floor, I could see my limp body lying above me while the ceiling fan continued to laugh and then look for my wife.

That was 2006. From that night on, I have been downright petrified of that slimy fan. Some nights I just lie on my back and curse at the thing. I know that it is just waiting to fall, terrorizing and humiliating me until I weep like a willow or some other crying topiary.

My fear is confounded by one truth: if that thing ever falls, it won't be on my head. I have done some measurements and it is much more likely to land in my lap, folding me over in excruciating pain and limiting my ability to reproduce forever. I have spent many wakeful nights, tossing and turning as the fan seems to get louder and louder, taunting me until finally I move to the couch.

I hate the blasted thing. The entire saga has given me one more life lesson: Always spend more than twenty five bucks on a ceiling fan.

Did you know Nathan's head was hit by a ceiling fan moving on full speed? He was 6 months old. Mike's dad lifted him up over his head and whacked him right into the ceiling fan. Fast forward 6 years and I'm now finding out that lazy eye can be caused by trauma to the head. The only time Nathan's ever had head trauma was that fateful day in June 2003. Hmmmm.

On another serious note, I was always afraid of the ceiling fan my dad put up in the apartment on 1000 East. It didn't have the right support to hold it and it shook like heck whenever we turned it on. I could totally see it loosening during the night and chopping off a head!