Training For A Marathon 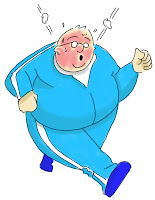 I have just begun the process of training for a marathon.  I may sign up for the Deseret News Marathon on July 4, or I may just go out and run one by myself.  Either way, I will be running 26.3 miles in approximately 12 weeks.  I am fully ready to commit myself and train for this holy event.
I had originally planned on running in the SLC Marathon that was held last Saturday.  I was not ready and I did not prepare properly.
About 5 years ago, I was on a running kick, but not to the extreme I am now.  It was during this period that I experienced the most embarrassing moment of my life.  Before I tell this story, please be advised that it is very disgusting.  Please also be aware that this story is 100% true.  I have in no way embellished it.  For further proof, ask my wife.  She will verify everything.
During this time we lived about a half mile from Liberty Park.  This was my preferred training ground as it has a very nice jogging track that went all the way around.
We were scheduled to go out to dinner with Cathi's parents at 6:00.  It was 5:00 PM, and I thought I had just enough time to run around the park once and return just in time to leave. Off I was on what was to be an unremarkable run.
I did not go far until I realized that I needed to use the restroom.  The need quickly became a necessity as a dark, painful pit developed in my belly.  If we are talking numbers here, #2 was not my friend.
I ran to the middle of the park, where I knew there was a cluster of restrooms.  Being that it was October and 5:30 in the evening, the men's restroom was locked.  I frantically looked around as my options were either to find a restroom or poo my pants.  Thankfully, I saw a mother and her son leaving the "family" restroom.  I ran as fast as I could and caught the door just as they were leaving.  The moment I caught the door was the same moment that I indeed had poo'd my pants.  Just a little.
The family restroom consisted of a single toilet and a sink.  However, I had no time to check my surroundings.  I simply sat down and allowed nature to take it's course.  It was diarrhea in it's truest and ugliest form.  Water splashed, tears were shed and a mess was created.  At long last it came to an end.
As I reached for the toilet paper, I was in for a newfound shock.  Gone!  Nothing left but the cardboard center.  It would have to do.  I tore it off and used it as a scraping device.  It was not an ideal scraping device as it was creating more mess than it was cleaning. Stuff was getting everywhere!  I finally scraped the last of it from my shorts and threw it away in the garbage.  As I cleaned up in the sink, I noticed the mess I had made of the walls around the toilet and now the sink.  Needless to say, I had created a masterpiece.
I finally made myself presentable and decided it was time to leave.  As I opened the door, I noticed 3 mothers and their kids waiting to use the restroom.  Apparently, I had been in there for quite some time.  Nervously, I opened the door and said to those waiting "I AM NOT SURE WHAT HAPPENED IN THERE!  GEEZE!"  And then I ran.
I ran fast.  As fast as I could.  But I did not run far.  The dampness of my shorts had created quite an area of friction on my upper thighs.  I had probably only ran 2 blocks before running had become impossible.  My run soon became a waddle.  I waddled from the park all the way home.  It was the most agonizing mile I have ever traveled.
As I finally approached the house, I recognized my in-laws car parked at my house.  Glancing at my watch, I realized it was 6:15!  I was 15 minutes late!  Worse yet, I was in no way presentable.
I rushed through the door at full speed, fully aware of my awful aroma.  As I ran to the restroom, the front room filled with a smell from the netherworld.  I yelled to my wife and in-laws sitting on the couch, "CAN'T STOP NOW!  GOT TO TAKE A SHOWER!"
To this day, I am still not sure what my in-laws know.  I do know that they know that I was late, in a huge hurry and smelled like poo.  I am sure they put the pieces together.  My most embarrassing moment ever.
Anyway, I am training for a marathon.  Wish me luck!

That's a crappy story -haha:). You should run the 24th of July Marathon...I will be handing out water. I could be the one to hand you the cup of water, when you make it down the mountain towards the zoo. (Most of it is down hill). The 24th of July Marathon ends in Liberty park, where all of the runners to use the restrooms.

I bet if you channeled all of that embarrassment into one race day effort, you could win the whole thing. On a separate note, I heard that the best way to keep secrets from your inlaws is to put it in a blog. That's where all my best kept secrets end up.

Gross! And yet another reminder of why I don't use public restrooms, especially in a park!!!

Good luck with running! I'm sure you'll be ready for the 24th of July Marathon. I'm a tad bit jealous because it's a dream of mine that will NEVER happen!!

Someday you will learn that not all stories should be shared.

Good luck with the marathon.

Isaac - I am like a reality show contestant...I have no shame. And you can't keep people with no shame down.

HAPPY BIRTHDAY ABE! I hope you have great plans for the evening!

Good luck training for the marathon. It's a lot of hard work but totally worth it. It's something you'll never forgot - crossing the finish line I mean. You may want to forget the final few weeks of training. Do you have a subscription to Runner's World? It really helped motivate me for my first marathon and there's a ton of good information in it.

Kerianne always asks me why I get nervous before a long run or a race. She says what can go wrong? Your story is exactly one of those things that can go wrong (and whoa dude, that's so gross, you're a great story teller). Sometimes I take a pepto tablet before I run, almost always before a race. You just can't be too sure.

Thanks Eric! That pepto hint is a very good one. I will definitely follow that one come race time. I need to get a Runner's World subscription too.

During your month-long blog-cation, I've been catching up on your older posts. Wow. I haven't laughed at a story like this for a long time. A true gem.

Pretty gross, but I just had to read it. Reminds me of a guy I saw running a marathon that had the "stuffs" running out of his clothes, but he just kept a runnin'. I bet he stank too. :)

Oh geez!! How did I miss this POO story!! LMAO I don't know how you ran as far as you did with poo in your pants! YIKES! If your inlaws didn't know....they know NOW! ;)

Wish that I was as brave as you are sharing stories! My boys have so many to tell:) My favorite is my married son not making it to the restroom-only the side of the road! After using his socks for TP...he yelled to his wife, "Give me your socks!". Poor girl-she knows these kinda stories well!!!

Okay I saw this in your sidebar...oh my gosh that would be awful!! I can't believe you blogged about this...well I can :). Oh I would have died.