There was a pirate on Trax today. 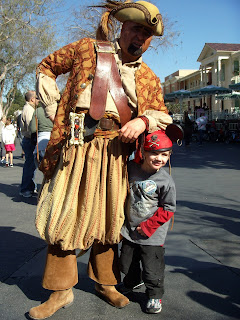 I went to a math teachers conference downtown and when I got on Trax, there was a pirate aboard our vessel.  He had an eyepatch and everything, and by everything, I mean an eyepatch.
When I got aboard, I looked at him a little longer than I should, and he caught me staring.  I had never seen a real pirate before, just guys like this one at Disneyland.  I grunted a little just to let him know that I don't take no gruff from no stinkin' pirate!  Then I sat down, making no sudden movements.  I rode that way all the way to the Salt Palace.
When I got to the conference, I sat down relieved.  But then I heard a kitten meowing.  I looked everywhere for a cat and by everywhere I mean under my chair.  Turns out it was a woman's cell phone.  She had a ringtone that was just a cat meowing.  That is the second hilarious ringtone I have heard in the last 2 days.  At another meeting I went to recently, a guy's cell phone went off to "Don't you wish your girlfriend was hot like me?"  A GUY'S CELL PHONE!
Wouldn't it be great if every time someone's cell phone went off and it is dance music, everyone in the room stopped what they where doing and danced for like 20 seconds?
If I ever get a cell phone, I am going to have a ringtone that is just a woman screaming bloody murder, like she is getting attacked or something.  Then, when it goes off in meetings, people will be so freaked out!  But the good news is that then I can say, "excuse me, I have to take this, I really need to help this lady."
If I ever get a cell phone, I hope that I get to throw it in anger sometime.  I have seen 4 or 5 movies lately where someone throws a cell phone and it breaks into 1000 pieces.  And the most popular place to throw a cell phone in anger is into a fountain.  I bet if you go to a studio lot at Universal with a fountain, there are like 50 cell phones in it!