The tests came back and I am officially a victim of alleycat brutality.

Today I was victimized by an stray alley cat.

AND LET ME LEAD OFF BY SAYING - I AM NOT MAKING THIS UP! AN ALLEY CAT ATTACKED ME WITH IT'S CLAWS OF DEATH!

This afternoon, I put on my jogging gear and headed for the hills: the Nikes, silky shirt, shorts, but no underwear - due to the painful chafing that accompanies them. (Another post for another blog for another day)

Oh, and by "hills", I mean Murray Park - the perfect joggers destination. Except, apparently, for the alley cat problem and the invisible, tattooed drug lords.

I was taking a short cut, next to an abundant pine tree, when I glanced down at my iPod. For some shockingly abhorrent reason, a "Dr. Jean and Friends" song came on while in "random" mode.

I HATE when my school music gets mixed in with my iTunes music. It's like watching a Utah football game and then it is suddenly interrupted with Harry Potter and the Sorceror's Stone. Oh wait... THAT ACTUALLY HAPPENED ONCE! Well, it sucks ALMOST as bad as that.

ANYWAY, while glancing down, I clumsily brushed up against the pine tree and to my chagrin (is chagrin a good thing?), I was viciously attacked by a raging lunatic feline.

My leg was wounded. Badly. Bloodied, in fact. Badly bloodied and bruised by a buffoon of a bobcat. (See photo below, but not yet...)

I kinda, sorta, kicked away the attack puma and hobbled away as if I was filming a scene in "Saving Private Ryan".

Now, I am not sure, but if you live in Utah and looked out your window today, you may have noticed it is pretty stinkin' nice out there. And so it was, on this - the 16th day of March 2010, that I was officially laughed at by two grown women walking the park in their capri stretchy pants and pullover tops.

When I returned home, sweaty and beaten, I immediately showed my wife the wound and spoke ill will towards the blood ravaged kitty. My wife's response was typical: "You are SO weird!" Followed by, "This could only happen to you." And then she laughed and laughed, like I was a brain-dead, prop person on "Fear Factor".

Here are my battle wounds. Please pay specific attention to the muscuality of my thighs and not the jewfro that adorns them. And you think this is bad, you don't want to see what happened to that stupid cat!* 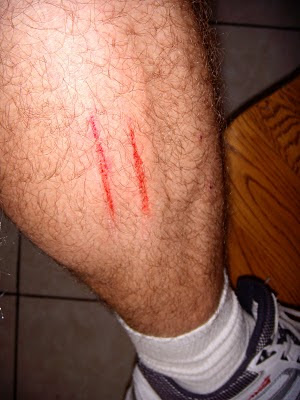 *The cat actually escaped with no harm.

I will be waiting for the post about the chafing underwear.

I hate cats. What else do you expect from the handmaidens of the devil?

Steve - you got me. I do have Nikes but they were in the closet.

Tammy - I think I may have blogged about that once already. I will have to look it up.

remind me to never look any Murray park joggers in the eye... for fear they are jogging commando.