How I saved Christmas for the PTA. 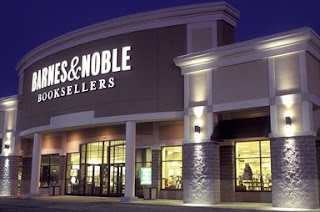 This year, Christmas was in jeopardy and it's festivity was hanging by a string.  Fear not, I saved it.  I saved Christmas!
I was asked on Friday by our school PTA to read a story at the local Barnes & Noble.  Apparently, whatever was sold in the store for the two hours that the teachers read, our school received 20% of the profits, or something to that effect.
Given the dismal outlook of the economy and my undying love of copious, repugnant, American retail giants, I decided I must do my part as a true American and save Christmas.  Christmas was there for the saving, I only needed to reach out, put my arms around Christmas, pull it close to my heart and save it.  It was a simple choice.  I chose to save.  I was a saver that day; I was a Christmas protagonist and a Christmas miracle was my goal.
I showed up five minutes late with my two secondhand, shabby books at my side.  In my knapsack of hope I had brought with me two of America's finest selections of literature: Don't Let the Pigeon Drive the Bus and The Pigeon Eats a Hotdog.  T'was to be a wonderful eve of delight and enchantment as I hoped to provide a rendering that the children could fancy. T'was suppose to be.
As I sat in the rocker that had been provided to me, it became clear that my role was not so much a literary reciter as a corporate babysitter.  Parents wrangled up their little ones and gathered them around, expecting me to entertain and delight while they grubbily rummaged through the Twilight series display and sipped on their five dollar lattes.  (Mom, Lattes DO have coffee in them.  I looked it up.)
My audience of 8-10 children hung on my every word.  I dazzled them with my crazy pigeon voices and held them in the cusp of my palm as the mystical words twisted through the air and into their anxious ears.  I even noticed a couple adults stop and listen in, entranced in the magic that was The Pigeon.  I even threw out a wink and a nod to the passerby's giggling at the clever way I read the written word.  It was though I was hovering over my body, watching myself reading in a such a spectacular manner.  It was, what some would refer to as an "out of body" experience.**
I was on such a lyrical role, I could sense the Christmas ghosts of William Barnes and G. Clifford Noble resting like phantasm elves on each shoulder.  I could feel their presence when I looked into the eyes of those children.  I bid them adieu and sent them back to the netherworld when G. Clifford's beard started tickling my earlobe.
While I read that eventide, I could hear the cash registers sing for joy.  They would open their traps, jingle their coinage and sing hosannas into the yuletide, merchandising air.  I could feel my words, and the words of that brave, brave Pigeon, move my audience, or at least the parents of my audience, into purchasing novels and calendars and bookmarks with the yarn on the end so that when you are not reading a book, you can hang your unused bookmark on a storage clasp.
As dusk fell silently and solemnly over the strip-mall that evening,  I knew I had saved Christmas for so many people this year.  This one, simple act not only boosted our school funds for fieldtrips and the like, but it boosted the spirits of our struggling economy.  I knew that somewhere, Henry Paulson, Secretary of the Treasury, was looking down from his office with a smile on his face because he knew that somewhere, somehow, a small town boy with a big heart was doing his part to help the economy recover. That boy, ladies and gentlemen, is me... a man inspired to inspire other's kids to inspire their parents to spend way too much at a bookstore giant that is looking out for the little guy - yeah right.
And that is how I saved Christmas this year.  You can thank me next time you see me.
**An out-of-body experience (OBE or sometimes OOBE), is an experience that typically involves a sensation of floating outside of one's body and, in some cases, perceiving one's physical body from a place outside one's body (autoscopy). The term out of body experience was introduced by Robert Monroe in 1971[1] as a bias-free alternative to belief-centric labels such as "astral projection" or "spirit walking".

Your school is so lucky to have you!

Oh darn, I missed it! Maybe you could just redo it, Cathi could tape it, and you could post it on the blog. We would all love to have a good bedtime story tonight.