The force is with me! 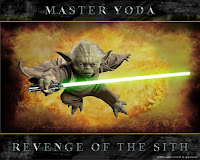 Lincoln and I have just started watching the Star Wars series.  I decided to start with horribly awful "Phantom Menace" and work our way through all 6.  Lincoln has never seen them and all of his friends love to play Star Wars.  We had previously watched the "Lord of the Rings" trilogy and Star Wars was our next project.
Well, so far so good.  Lincoln was only semi interested in the Phantom Menace, but after the second one "Revenge of the Sith" he was begging for more.  I kept telling him that Yoda was the best fighter in the galaxy, and he did not really believe me.  At the end of the Sith movie, Yoda kicks some major ass and now Yoda is his favorite character.  (After Jar Jar Binks, which is just embarrassing!)  Anyway, I am excited to get to the third movie, which is almost up to par with the original trilogy.  It is also interesting to watch the movies in chronological order from the beginning with someone that has never seen the series.  Lincoln already knows that Anikan Skywalker becomes Darth Vader and he will not be surprised when Darth says, "Luke, I am your father!" like I was when I was 10.  Here's to you Yoda, the greatest of all the fighters.