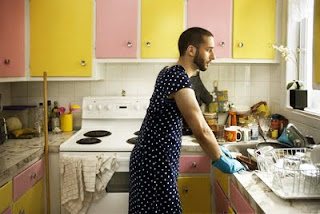 I've debated on whether or not I should be posting the highly confidential enigmas of an American Househusband. I then thought about what I am about to write and it occurred to me: I am sure that most wives already know our secrets and suffer with them for fear that we may go to more football games or spend more time on the couch. Further, when I debate myself, I very often win. Or, I should say, I win more often than when I debate my wife, which is virtually zero percent of the time.

Here is the deal: When we men are responsible for the kids, we do things our way... which is to say - we do things the way we would normally do them if we were not constantly being scrutinized by our wives.

Tonight I had full rein of the house. Here was what was on the agenda:

I mowed the lawn, which I did without being asked or persuaded. Calder helped by pushing his little plastic lawn mower behind me, catching any spots I may have missed. This was the highlight of my chivalry husbandry for the evening. Time to get break out the "World's Greatest Husband" mug I got for Father's Day.

It was then inside for a some Root Beers and pizza. Normally, we would split a Root Beer, but tonight was a special occasion! Everyone gets their own Root Beer! I am the coolest dad on the block. No dad gives their 3 and 7 year old sons full-on Root Beers, do they?! And these were the bottled Root Beers. Someone could have sliced a finger open... and seriously, does a 3 year old really need 12 ounces of liquefied sugar and bubbles in a glass bottle?

After pizza and Root Beer, it was to the couch for some father/son/Wipeout bonding time. We cooked up some extra-buttered popcorn, which we ensured was spread evenly throughout the floor. (It is a little known fact that microwave popcorn grease-butter works wonders on hardwood floors. However, it is also a well known fact that too much microwave popcorn grease-butter can also cause cancer and death. This is why I never roll around on our floors with my shirt off after spilling popcorn on our floors)

My wife returned before bedtime, but I normally let them stay up a little later when she's not around. Sometimes I allow the boys to jump around the front room to loud music, most of which is curse-word free.

Occasionally, we play with pocket knives and fire... but never together... that would just be dangerous and irresponsible.

Why do we men do this? Well, really it can be narrowed down to two reasons: 1. A need to be considered the cool parent. 2. Pure laziness.

My mom claims that when my dad would watch us and there was a poopy diaper involved, my dad would put the pooped up child in the bathtub and await the return of my mom to clean up the mess. I'm not sure that this is actually true, but some of my earliest memories are of sitting in a waterless bathtub, waiting for my mom to get home.

There you have it ladies. You now know our little secret. But look - take it easy on us - we're men. Further, when you come home, your kids are happy, healthy and safe. FYI: Just don't slip on the buttery floor.

Uh, your poll is making me nervous. All answers better be "no", but unfortunately, I have seen all too many times, people check their books and take them directly into the bathroom at the library. We'll hold on to them for you at the counter. We don't mind.

The polka dots are very flattering on you. Nice to hear another dad treating his kids to Wipeout. I have 3 daughters, and we all love it! We watched the episode with "Super Shorts" last night.

Sorry Traci. The truth hurts, especially for librarians. I would suggest a large bucket of hand sanitizer to dip each returned book in.

Sco... you are correct. Wipeout is a father/child treat that is not to be missed.

If I take my book into the library bathroom it's in my bag which does not touch the floor so it should still be "clean". That's not really the question you should be asking anyway. Don't you think you should ask who washes their hands after using the toilet? Because that's what I want to know.

Tammy, the poll refers to people that have read a library book in ANY bathroom, including their own home bathroom... not just the library bathroom.

I know but what if you never read your book in the bathroom BUT you use the potty and don't wash your hands but then go pick up your library book? Gross.