Perhaps the funniest true Dollar Store story you will ever hear! 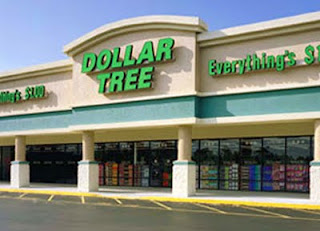 The other day, I had a few (a few meaning 45) minutes to kill before I had to go over to our church to be audited by an auditor. Now, I would never think to be so cavalier to think that I could just kill minutes like they were candy, but I also don't think I would be so cavalier as to mix my metaphors.

Given that 45 minutes is plenty of time to complete many menial tasks, I decided to cross one the most pressing ones off my list: shopping at the Dollar Store.

I set foot in the Dollar Store on a blustery day. It was a blustery day on account of the wind. The wind causes a bit of a bluster and when the wind blows it creates what is referred to as "blustery". Just ask Winnie the Pooh. It's always blustery in his neck of the woods.

The Dollar Store has two different carts to chose from: those with long, metal rods to hold your balloons and those that do not have long, metal rods to hold your balloons. I selected a balloon holding cart, even though a balloon purchase was not in my future that day. Balloons always seemed such an odd thing to buy at a dollar store. I mean, who is really trying to save money on balloons? "I need to get my fiance some balloons, but I really don't want to spend the $1.50/balloon the big box chains charge. I better hit the dollar store!"

My shopping list for the evening included 100 different toys and prizes, to be joyfully distributed to the good boys and girls in my first grade class over the course of the school year. I had not done the calculations prior to entering the store, but I estimated that the prizes would cost roughly just over one hundred and six dollars. (I am not good with math)

There I was, standing in a full on, double-breasted cream suit with an accompanying white and black striped tie - my cart stuffed to the brim with with all sorts of garbage toys. As I reached for my third WWF fighting figurine, it was then that I realized - people were looking at me. Apparently, the Dollar Store regulars are not used to seeing a suited man storm the aisles in search of plastic toys - 100 plastic toys.

As I caroused the store, it dawned on me: I have never, ever, in the course of my 33 year old life purchased pre-filled balloons for any reason. What kind of horrible person am I? I have kids, you know! Kids! And not once have I ever bought them a balloon. I bet even Hitler bought his own kids balloons, and he was Hitler. Which begs the question: If Hitler had not been Hitler, would he have bought his kids more or less pre-filled balloons? These were the questions I was asking myself as I aimlessly wondered the store. (The questions about Hitler and the balloons, but mostly about the balloons)

Finally, I had reached my 100 toy maximum and became firmly entrenched in the checkout line. I am not sure why the Dollar Store only hires one employee to work at a time. Maybe it is the fact that they don't want to pay people more than a dollar an hour? But every single time I have the pleasure of shopping there, there is always a line of people at least ten deep.

You do NOT want to be behind me in line at the Dollar Store. It takes a very, very long time to scan 100 items. I could just hear the groans and complaints as I piled my stash on the automated treadmill. As the 17-year-old with the horrible half mustache scanned each item, the kind lady behind me surprised me with a question.

"I just have to ask - are you buying all of this stuff for a company party?"

"Is it for some sort of carnival?"

I never did tell her why a well dressed man like myself (I was wearing a double breasted suit. One breast is simply one breast not enough... That is good rule of thumb for most things in life actually) was in the dollar store buying 100 plastic trinkets. I find the idea of her sitting in her Lazy-Boy recliner at home, calling all her friends, trying to figure it out... hilarious. I find the idea of her becoming completely creeped out by it all even more hilarious.

Finally, the strangely, greasy mustached boy gave me the total: $103.67. I thought back to my original estimate of $106.00 and was angry at myself for overbidding. If this was the Price is Right, I would have gotten the "Duh, Duh, Duh Duh, waaaaah" sound and I would have had to put all my prizes back on the shelf. Thankfully this was not the Price is Right, but it was odd that a man looking vaguely like Bob Barker was looking at the dollar spaying and neutering kits. (I would NOT recommend a dollar spaying and neutering kit. Your dog or cat or husband will thank you for it)

I rolled my cart over to the sliding doors, which magically opened upon my arrival. I energetically left (I had an auditor to meet. Who wouldn't be eager?!) but alas, I could not leave. The long bar extending upward from my cart was too long for the door frame! I tried again, this time still unsuccessful, but creating an even louder crash. Given that the door is right by the registers, I glanced over and noticed all 25 people in line staring right at me.

I thought to myself, "They must have gotten this thing in here SOMEHOW!" I tried again. BANG - No success. "This must be a cart that just stays in the store" I rationalized.

What I did next and why I did it will forever remain a mystery. I took the cart and leaned the entire thing sideways, allowing for just enough clearance for the bar to pass through the doorway. This would have been a genius plan, had my cart not been overflowing with crap. When I tilted, a fourth of the contents spilled across the floor. I embarrassingly hit the ground and spent the next few seconds scrambling to pick up seven Bratz type dolls, a load of fake playdough and a couple packs of garbage crayons off the Dollar Store floor.

I am not a proud man, but I can honestly say that this was the first time I have ever spent any time on the floor of a Dollar Store. Fortunately, I was wearing my Double Breasted!

I can still hear the giggles from the people in line. They pierce my soul like small, midget like daggers that are normally used to scale fish.

I am not a proud man, but I can honestly say that this was the first time I have ever been laughed at in a Dollar Store. Fortunately, I was wearing my Double Breasted!

Dignity intact, I put the spilled bags back in my cart, turned toward the parking lot and left in a jiffy. I swear I could still hear the people laughing at me when I reached my car.

It was a blustery day.

Hilarious!!! I wish I could have been there.

Very funny! -single breasted, Price is Right, midget daggers - Ohh, I laughed a lot.
I can't believe you didn't tell the lady that they were for school.

On your next child's birthday you must get a small bunch of balloons. But make sure you get high float otherwise they're all dead by morning. (Also don't ever buy them at Smiths.)

Are you the financial clerk for your ward? My husband is for our ward and he just had an audit as well.

Thanks Kerianne and Linsdsey. I'll remember high float. Very important. Yeah, I am financial clerk. Have been for almost five years. Not sure why I am - I have zero math skills and even less money sense.

If I saw a nice looking young man, such as yourself, in the dollar store in a double breasted suit buying so many cheap toys I might think pedafile. But as you know I am paranoid and I always think the worst.

You must shop at a classy Dollar Store if they have automatic opening doors. They are building a Dollar Store by us and I'm so excited. I also have never bought helium filled balloons for my kids but maybe I will when it's more convenient.

I wish I could have seen the spectacle. I would have been one of the peeps laughing in line at you. This was a very funny post. Perhaps there are more funny stories in you. I was begining to think you fizzled out after the pooping bandit.

Great touch not telling the clerk that they were for school. She'll have a story about the funniest customer now, too...

It's almost like a challenge now for me to try to get through one of your posts without bursting into seizure-like giggles.
I would've paid $106.00 to watch this.

This is marvelous. I actually laughed until I cried. And now you know that the bar isn't there for balloons, but to keep nincompoops from absconding with their shopping carts.

By the way, I have bought a filled balloon from Dollar Tree and the thing stayed afloat for over a month. Now there's a great bargain!

What a sight for sore eyes this would of been:) Makes me think of my 3rd grade teacher-Mr. Strait. Ha!

I have done that very same thing with those carts. The lady told me it was to keep people from stealing the cart... Seriously??? Who steals a cart... FYI... We call them "buggies" in SC.

I have to say that I'm one of those people who would try to save money on buying balloons. Why pay a dollar fifty when you can get them for less? Great post Abe!

You have NEVER bought balloons to play "Alvin and the Chipmunks".

Your children are indeed deprived! :)

Buy a balloon right now and inhale the contents then sing Christmas time is here. Season is relevant! It must be done TODAY before your children are permanently warped!