Mission: SPACE - The day I almost died at Disneyworld. 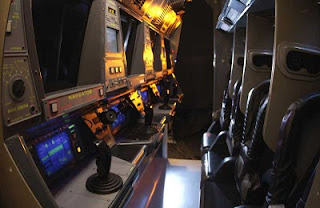 I guess Disneyworld would have been a pretty cool place to die. At least Cathi would have had a great story to tell.

Mission: SPACE almost killed me that day. When I say it almost killed me, I mean just that: I was hanging by a thread, ready to become a stiff version of my former self. The Grim Reaper was sitting next to me, asking if I would be needing the complimentary motion sickness bag hanging over my head.

I almost got off the ride, crawled through the corridor into the gift shop, curled up in the corner, next to the $30 plush Goofies and the $8.00 lolipops and went the way of all flesh. Almost.

I should have known better.

Several people have been taken to local hospitals for chest pain and nausea after riding. Most who complained of these symptoms were over 55 years old. Two people have died after completing the ride, although due to pre-existing conditions - one, a 4-year-old boy, with an undiagnosed heart condition, and the other, a 49-year-old woman, from a stroke due to high blood pressure.

But death would not be taking me that day. I emitted an aura of Yospe bravery previously unseen by mankind. No, not during the Great Depression, the World Wars, and the Y2K bug has any Yospe shown the great bravery that I showed that day.

Warnings throughout the attraction caution that people who do not like enclosed spaces, spinning, or are prone to motion sickness should not ride. Signs also warn that the ride may cause nausea, headache, dizziness or disorientation, and that people prone to motion sickness, or who have a headache or an inner ear problem, or who have a history of migraines, vertigo or elevated anxiety also should not ride.

I refused to give up the ghost. I could feel my lungs crushing in on themselves. Sweat dripped from my brow as I gripped my control panel. Every fiber of my being seemed to become mushy, like the fiber in Malt-O-Meal, not the fiber in fiber-rich bread. That fiber would have been the fiber in my being BEFORE the ride.

The attraction exposes riders to forces up to 2.5G, more than twice the force of gravity at the earth's surface (effectively multiplying a rider's weight by 2.5). A few months after the ride's opening, motion sickness bags were added within easy reach of riders.

As the craft accelerated, I could feel the skin start to peel off my face. I like the skin on my face. This is probably my most favorite skin on my entire body. I began to wonder, is this really Disneyworld? Where are the cute, singing robotic animals?!

No one responded to my call for help. I cried louder. Could the ride operators not hear my plea for life? I wanted to live and my calls for living went unanswered.

Several people have been taken to local hospitals for chest pain and nausea after riding.

I glanced at Lincoln sitting next to me and his expression was one of fear. This was not Space Mountain or even Jet Star II. This was a Disney-ized torture chamber and we were the lab rats.

I could see Walt Disney hovering above my head, eerily laughing at my extreme anguish. Why was he laughing? And why was Neil Diamond rubbing his back? He hasn't even died yet. My hallucinations continued.

There are also signs which instruct the rider to keep their head flat against the headrest; if one ignores this, the centrifugal motion acting on one's head can cause undesirable effects such as dizziness and/or headaches, or possibly even more serious effects.

Also featured on the attraction are various labeled buttons and switches which the rider may play with but do nothing; they are only there to add to the realism aspect of the ride.

Trust me, there is not a button that stops this ride.

I held Lincoln's hand and whispered him a sweet goodbye. I told him that he was now the man of the family. I told him to tell his mom to remarry. She could do much better than me anyway. However, I am not sure he could hear me as it looked like he was about to pass out. I ask him about that day now and he just nods his head and says, "I don't want to talk about it dad." I don't want to bring any more harm on the poor boy.

At long last, there would be no return trip to Earth. The hatch doors opened and my harness released. I rolled out of my seat and onto the cold concrete floor. EPCOT had gripped my throat in it's cruel, cold hands and squeezed.

The nearest garbage can became the new home of my old smoothie. It did not taste as good the second time.

I grabbed Lincoln's hand and we headed to meet mommy. Much to my chagrin, she had not remarried or even dated during the time we were gone. I thanked her for her faithfulness and then fell into her arms, weeping with joy. I told her about the Grim Reaper sitting on my left, about the vision of her telling me to go toward the light and about Neil and Walt's torrid affair. I told her that she had to go on it just to see what it was like, but if she did not make it, I would not remarry.

I had escaped death that day. The ghosts of Disney would not be fetching my soul, for I wast brave and I wast a survivor.

Cathi told me about this "ride". The tricky part is that all of their "motion rides" have the same warning signs so if you listened to what it said you'd be missing out on great rides like Indiana Jones, Space Mountain, etc.

What's that saying? When you know better you do better? Now you'll know for next time.

I have always been afraid to try this ride and I don't think I ever will ride it. It sounds frightening.

K- so my comment is about your previous post. The Cirque de Soliel means the Circus of the Sun. So it does have to do with the circus. Also, that picture or the woman in the trees is really really creepy!

Tammy - Yes, but two things: 1. There was a separate line if you wanted to ride the "mild" version of the ride. Lincoln wanted to try the "extreme". 2. There were WAY more signs than the other rides you mentioned. In fact, I am surprised they don't make you sign a waver.

Esther - That is a little comforting.

I can't believe that your kids want to go on fast scary rides. My kids would never ride on so many of the rides you've talked about. That's great that you lived to tell about this one.

(I noticed your misspelling of Cirque Du Soleil too. It made me laugh for a long time.)

Well, I'm glad you didn't die. That would kind of ruin anything "Disney" for the rest of us! :)

Did Cathi go on this ride? What did SHE think of it? Did Lincoln hate it too?

Lori - This is the first ride of it's kind that I have actually seen Cathi get a little woozy on! She was waiting with Calder with the child swap pass. She asked Lincoln to go again and he absolutely refused. He HATED it! I can't imagine anyone going on it and not getting sick.

This was a genius piece of writing my friend. Juxtaposing the ride's warnings with your story was pure golden brilliance. I'm glad you lived to tell it.

Why thank you Jess. (Love the alias by the way) I don't know if there is anyone that I would be more honored to be complimented by... or something like that.

due to nausea, migraines, and vertigo I had to skim through some of this...

thanks for the warning!

Sounds like you are describing being pregnant so don't try that at home!

Sabrina Schantzen Photography said...
This comment has been removed by the author.
May 6, 2013 at 8:06 AM

I had similar experience but a woman from Germany who was rubbing elbow with me began vomiting blood and was screaming at her husband/boyfriend and moaning and trying to get out as soon as the ride began.

You can read my full story here. http://www.iblogmyblog.com/2013/05/disney-world-and-mission-space-what-disney-is-not-telling/

Not as funny as Blog O'Cheese description of his experience, but wow they should really warn people before sending them to their anguish.

This ride was great I went on it five times, could not get enough

I love your story! We just had our third trip to Disney and my wife and daughter talked me into riding the more extreme version. We thought the calm one was rather boring and thought it couldn't be THAT bad. Boy, were we wrong. As soon as we were lifting off, my stomache stayed on earth while the rest of my body traveled to space. I never had such a sick feeling. Took me a bit to recover.

You are very funny. We did this ride today and your writing was my sentiments exactly. I pleaded for help and nobody answered. As soon as the ride was over I ran for freedom! I almost forgot my carry on were it not for my husband.

Before there was a choice of a less intense ride: The ride made me so sick! My eyes could not focus on anything for hours. I never felt so dizzy in my life.

My family just rode this ride this weekend and the author's posts and comments are dead on..... I literally thought a rock had hit my chest. The operator at the front told us it was a mix between space mountain and the tea cups, both of which I can handle. I literally thought I was dying in this ride. My biggest fear beside me dying, was if my husband was okay as he is older than I and cannot handle the tea cups. I will never ride this again and will discourage anyone else as there is no way out once you are in there. I had a headache for much of the rest of the day.
I have never been sick on any other ride and I am a tough cookie, but this was dangerous.
First and last. So scary to think you are dying and you cannot do anything about it, but sit there. Need a stop button, so what you ruin someone else's ride, at least you can get out.

I rode Mission Space this week and experienced a similar fate. I threw up in my mouth and ended up having to choke it down rather than vomiting on the other passengers. It took me an hour on the bench outside of the ride before I was able to stumble out. I rarely, if ever, get motion sickness, but I also thought I was going to die. This ride is no joke.You couldn't pay me to come within 500 feet of it ever again.