TOP 20
20. Dexter: New Blood (Season 1) - DVD (Showtime)
I hated, HATED, the last season of Dexter years ago. This did not entirely make up for that awful season, but it was a step in the right direction and it made Dexter fun again.

18. Call the Midwife (Season 11) - Netflix
A guilty pleasure, this was the best season in years! And when I say a guilty pleasure, I don’t mean that this is not a well made, well acted series, because it definitely is.

A true story, it saddened and angered me, as it will you.

16. A Handmaid’s Tale (Season 4) - DVD (Hulu)
Once my absolute favorite series, it has certainly dropped, but I still quite enjoyed season 4. I did like the stirring way it ended.

15. Yellowjackets (Season 1) - DVD (Showtime)
Enjoyable and provocative, even if it is a little of a teenage drama.

14. The Devil’s Hour (Season 1) - Amazon Prime
Absolutely creepy, I got chills several times during the first season of this series.

13. Ozark (Season 4) - Netflix
The worst of all four seasons, but I still felt good about how it ended and it wrapped things up nightly.

The best Crown season since season 1. I might be in the minority in saying that, I don’t know. I know it wasn’t exactly “historically accurate,” but it was downright riveting and that was good enough for me.

Its portrayal of LDS members is troublesome (if not funny) and it is definitely not as good as season 1 was, but it still was mesmerizing and Rose Byrne is super.

You may have noticed the lack of “Yellowstone” on this list. I honestly tried a second time to get into Yellowstone this year, I just could NOT gain interest. Instead, I tried this prequel to Yellowstone and I enjoyed it much, much more than I did Yellowstone.

I watched it twice, once alone and once with my Beatle loving son. I am not a huge Beatles fan, but I am a big enough fan to enjoy this show. It was fascinating to see the Beatles write songs and their process of creating brilliance.

This season almost felt “too big” and lost a little luster for what made it great in the first place. That said, it still was insanely great and each episode felt like an entire well made movie.

No, I haven’t seen the new season yet. But, I did get around to watching season 1 this year. It was at times ridiculous, but far more often, enthralling and impressive.

I am a huge Tim Burton fan, but now I am also a huge Jenna Ortega fan. She makes this show go and is gripping in the title role. Throw in some laughs and some dark humor and some real anxious moments and you have a hit.

Apple TV did it again with another excellent thriller. This one is loaded, loaded with comedy, and funny comedy at that. My wife talked me into watching this (I was hesitant) and it far surpassed my expectations.

For my cup of tea, Apple TV had the best series this year. This is a creative, thoughtful, eager and ambitious show that had me thinking about it far after each episode ended.

I watched this on a whim and I was captivated by this true story. I was also captivated by Paul Walter Hauser’s performance as the creepy killer. This one kept me on edge and guessing the entire time.

It’s been one of the three best TV shows on television for the past eight years, and while it didn’t go out with the same bang as its predecessor, Breaking Bad, it still had a fabulous season and was the best show on television this, its final year. 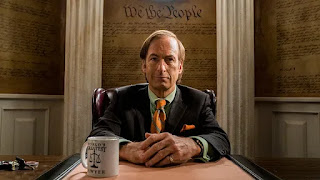