This was the first full year that my wife and I had ditched the cable/satellite and watched strictly streaming TV shows.  I thought we'd watch less TV, but unfortunately, I actually think we watched more. While we watched all of these shows, I can certainly say all of them are not for everyone. In my comments on each show, I'll try and let you know if watching this show is right for you.

Please do not judge me for liking these shows. I like what I like and I make no qualms about liking what I like. However, I'd love for you to comment, either on Facebook or here, if you love a show that I missed so I can watch it this coming year. Or, if you feel a show has been ranked too low.

*The seasons I watched this year are in parenthesis. Also included is the streaming service I used to watch the shows.

20. House of Cards (Season 3) - Netflix
I thoroughly enjoyed seasons 1 and 2 of this show. Season 3 was still great, but dragged a little in the middle. I think I am tiring of watching a show full of such evil people, with not a hope of a genuinely good character in it. Still, Francis Underwood is one of TV's great characters and Robin Wright has a lovely back.
Not for those offended by sex, drugs, bad language and Robin Wright's back.

19. Parks and Recreation (Season 7) - DVD
One of my all time favorite comedies went out in a good way this year. I'm not going to be "that guy" that says he loves a show before anyone else jumped on the bandwagon, but I started watching this show season 1, episode 1, when it first aired and it was bittersweet to see it end this year. Fortunately, it was a solid finale.
Not for those offended by complete and total awesomeness and hilarity.

18. Hell on Wheels (Seasons 1-4) - Netflix
I'd rank this show higher if it didn't play of such negative stereotypes. It's pure country western with a great story and great acting. But I don't like how Native Americans, African Americans and especially Mormons are portrayed.  If you like westerns, this show is definitely for you.
Not for those offended by negative and false portrayals of ethnic and religious minorities. Also, some mild sex scenes and Common's face after getting mauled by a bear.

17. Downton Abbey (Season 5) - Amazon Prime
After some down years, Downton finally made a triumphant return to greatness thanks to good but believable storytelling. Take my man card, I don't care, I still like this show. And if you don't take my man card, you will later when you get to #12.
Not for those offended by rich people whispering about sex and Elizabeth McGovern's terrible acting.

16. Vikings (Season 2 & 3) - Amazon Prime
I am watching season 3 right now, and toward the middle of the season, it reaches epic heights. I may have to edit this list and rank it higher. This show is like Game of Thrones, but for non-nerds. Since I am both a nerd and a non-nerd, I can say Vikings is awesome.
Not for those offended by lots and lots of Vikings hacking each other with bloody axes, some sex and really, really bad accents.

15. The Americans - (Season 1 & 2) - Amazon Prime
It's a shame that this show is never nominated for any Emmys because the acting by Keri Russell and Matthew Rhys is second to none. The best part of this show are their disguises, which are always hilarious and top-notch. Great writing as well.
Not for those offended by sex. Lots of sex in this show. Also Russians actually being cool.

14. Daredevil (Season 1) - Netflix
The best superhero TV show I have ever seen. It's dark and cool and makes me feel like I'm not watching a superhero show. Jessica Jones (see above) also has the potential to be this good, but is not quite there yet.
Not for those offended by some sex, fighting scenes and chemicals going right into a guys eyes! RIGHT INTO HIS EYES!  (This show is definitely not for kids.)

13. The Last Man on Earth (Season 1) - DVD
Will Forte and Kristen Schall, two of the funniest and most underrated actors on the planet.  A great concept and solid writing make for a very funny show. It wore thin in the middle, but made up for it at the end.
Not for those offended by a guy constantly trying to get women to sleep with him and a swimming pool full of feces.

12. Call the Midwife (Seasons 3 & 4) - Netflix
Man card still intact? Not anymore. I was really bummed when Jessica Raine left the show because I had a bit of a crush on her. (My wife knows and is okay with it.)  This show still chugged along, making for some of the best written and most dramatic moments on TV. Alright, my man card is now on the fire. It's burning.
Not for those offended by nuns and women screaming while giving birth.

11. The Goldbergs (Season 3) - ABC.com
This show has flat out become the funniest show on TV. I love every minute of it. Barry Goldberg is the funniest character on TV.  Why this show doesn't get more credit, I'll never know.
Not for those offended by one of the worst "going through puberty" voices in the history of TV.

10. Game of Thrones (Season 4 & 5) - DVD
Alright, I finally climbed aboard the Game of Thrones nerdwagon. Seasons 1 and 2 were just okay, but the fake scenery and storylines were pretty dreadful. Perhaps they've got more money to spend on effects, but things really picked up for me in seasons 4 and 5. Watching Joffrey die was one of the most satisfying TV watching moments of the year for me.
Not for those offended by nudity, sex and dragons eating helpless goats.

9. Rectify (Season 2) - Netflix
Rectify is hands down the best show you've never heard of. Watch it and you will not be sorry. GREAT acting. I mean the kind of acting you'd pay to see. Unbelievable story. You should watch this show.
Not for those offended by a little violence, some sex and sexual dialog.

8. The Killing (Season 3 & 4) - Netflix
I've heard complaints about season 3 and 4 of this show not being up to par. I don't get it. I think they're better than the first two overly drawn out story.  The swearing definitely picks up in these seasons, but the stories are even better and the drama is at full force.
Not for those offended by swearing and violence. And more violence.

7. Broadchurch (Seasons 1 & 2) - Netflix
This is basically the British version of The Killing. It was released after The Killing and they do almost everything even better than that great show.
Not for those offended by violence and thick English accents that you sometimes can't understand.

6. Justified (Season 5) - Amazon Prime
I wish I was as sharp and funny with my comebacks as Deputy Raylan Givins or Boyd Crowder. But alas, I can only enjoy from afar their wordsmith skills. I love this show. I love the characters. I love everything about it. One of my all time favorite shows. Sorry to see it go.
Not for those offended by the lesser swear words and a little gunplay. A jerkwad with a gun that pops out of his sleeve.

5. Homeland (Seasons 1-4) - DVD
Having had a teenaged crush on Claire Danes, I think we can all agree that she looks much better as a brunette. She's terrific in this show as well. The plots are a bit, shall we say, out there. But I can get over that as the performances and the drama is fantastic.
Not for those offended by swearing, sex, violence and Claire Danes as a blonde.

4. The Walking Dead (Season 5) - Netflix
The corny lines. The corny, corny lines. If not for the corny dialog, this might be #1. Either you are the type of person that loves the Walking Dead or you hate it. I can't get enough. I'd watch 100 seasons if there were 100 seasons available.
Not for those offended by zombies getting their heads smashed in in every conceivable way. Also, a zombie gets ripped in half and his lower half falls down a well.

3. True Detective (Season 1) - DVD
Alright, alright, alright. Let's get this straight, I'm talking only season 1 here. I have yet to see season 2, and from what I hear, I am probably not going to take the time to watch it. But I have seen season one and it is flipping awesome. This was my wife's favorite show we watched this year, but it is DEFINITELY not for everyone.
Not for those offended by pretty much everything that can be considered offensive. Matthew McConaughey playing a cop.

2. Better Call Saul - (Season 1) - DVD
This show is a funnier Breaking Bad. I just finished all ten episodes and I want to watch them again. I probably will instead of watching more disappointing episodes of The Blacklist. I love this show. Can't wait for season 2.
Not for those offended by the first episode, a few swear words and sleazy lawyers.

1. Fargo (Season 1) - DVD
The best show on TV, hands down. Now hands up. Now hands down again. That's how great this show is, it makes you put your hands up and down. I love the dark humor in this show. I hear season 2 is even better. Not sure how that is possible, but I'm sure it will be #1 on next year's list too.Martin Freeman's best role to date. 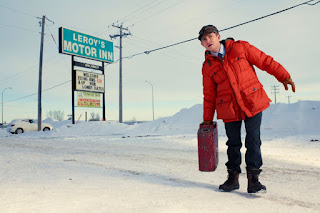 Not for those offended by a little sex, lots of violence,  some swearing and the greatest show on TV.

I loved House of Cards! I was drawn to it because all of the characters were so evil and unlike anyone I know in life.

I am slightly offended that you didn't put Doctor Who anywhere on your list. Anywhere! There are 34 seasons in total, beginning from 1963 until now. While I grew up watching classic Who, the series was picked up again in 2005 and a lot of people begin watching it there, which is just as well. It is extremely low budget sci-fi, but incredibly entertaining and will eventually suck you in. If you do start with 2005, keep in mind, you have to give it a few good episodes or it isn't that appealing. But seriously. I can't figure out why everyone and their mother don't watch this show!
Since you requested new shows to watch for next year. :)
And it is on Netflix, both the classic and the rebooted seasons!

I rant and rave about Hell on Wheels which is great. I miss Justified so much but got my Walton Goggins fix in the Hateful 8. I need to pull the trigger on Fargo. I hear so much good about it.

Hey there!
Unfortunately (or maybe fortunately), I don't watch enough shows to come up with a top 20, or even a top 10. But I do watch a few and they are on your list.
My favorite show on TV (by far) is Fargo. This season might be my all time favorite season of any show, ever.
Next is the Walking Dead.
Next is Justified.
I'm just about done watching the entire run of Lost. Just started the last season. It is odd, but I like it.